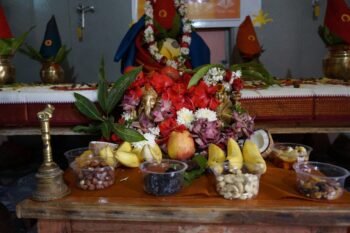 What is Significance of Ganesh Chaturthi ? Famous and worldwide know Ganesh Chaturthi or Ganapathi Chaturthi is festival which falls on fourth day of Bhadrapada between August -September. On this day  opulent and elaborated ceremonies are held to honor the god Ganesh.In Hinduism, Lord Ganesh is accorded a prime status. Ganesh  Chaturthi Puja is one of the widely celebrated Hindu festivals in the country especially in the Maharashtra. The blessings of Ganesh are invoked at religious ceremonies since he is the one who can remove all difficulties and grant us success, especially when people are commencing a new business or an enterprise. Ganesh or more popular Vinayaka is known as the fortune giver and one who can assist to avoid natural calamities. He is also the patron or god of traveling. Vinayaka is portrayed with an elephant’s head on a human body. He is worshiped in the beginning of all-important occasions like marriages, festivals and sacrifices. Ganesha is the first to be first propitiated. Lord Ganesh is understood by 108 different names like Gajanana, Vinayaka, Vignaharta among others.He is also known as the master of all academic subjects, all the sixty-four arts and crafts. It is said that the great epic Mahabharata is narrated by Sage Veda Vyasa to Ganesh and he wrote it.In Vedic literature , he’s depicted as a pacesetter of troops (Gana – troops and  Isha – lord or leader). During Purana period, Lord Ganesh became a famous and significant deity. Various stories from the different Puranas give detailed information about Ganesh like he is the son of Parvati and Shiva, has elephant head, etc.Adi Shankaracharya 8th century established Ganesh worship of pancha devata or Panchayatana puja and as such  Ganesh  as  main pillar.There are also  even archaeological evidence suggests that this practice long predates the birth of Adi Shankara for example Wikipedia mentions Gupta Empire period , Kushan Empire era (pre-300 CE), Village of Nand 24 kilometers from Ajmer

Legend of the festival:

A story in Ganesh Purana originated from Mahabharata tells the reason and practicing method of the festival. There was a Kshatriya who was ugly and very poor so he decided to renounce all and go to the forest. In the forest he met one Rishi by the name Soubhari .After listening him rishi  advised him to perform Ganesh worship. Due to the worship of the Ganesh kshatria obtained wealth. Due to his virtues within the next birth, he became very well know as  Kardama Muni. (Ganesh Purana Upa. 52 – 53).

The benefits of Chaturthi fasting include material progress, happiness, and prosperity.Supreme Lord Krishna gave to  Maharaj Yudhishtir knowledge of fasting on Chaturthi vrat  and its befits .Chaturthi vrat is also mentioned in several other scriptures such as  Narasimha Purana and Bhavishya Purana.  It removes the obstacle and creates favorable situations for success. It brings Knowledge, wealth, and fulfillment of desire.It also minimizes the malefic effect caused by planet Mercury. Very good for the people involved in the trade,journalism,writers,sports people,actors.Worshiping Lord Ganesha on Chaturthi provides powerful benefits. Chanting mantra “Om Gam Ganapataye Namaha” helps in fulfillment of all wishes.Special Custom and  repercussions behind Vinayaka Chaturthi: There is a custom of not looking at the moon on the day of Ganesha Chaturthi. Legend from Purana tells – once lord Ganesh started on his journey by riding on his vehicle mushika (mouse). On the way, the mouse slept, and Ganesh fell-down. Seeing this, Chandra (moon) laughed. Ganesh became so angry and cursed him saying that from ‘this day onward your glory will decrease, and nobody will look at you’. Then moon asked for apology out of repentance. Then Ganesh mitigated his curse as ‘only on the day of Ganesha Chaturthi of Bhadrapada month, the one who will look at you even by mistake would invite a bad reputation’. In order to get relieved, person must listen to the story of  Vinayaka  Chaturthi at the end of the day.