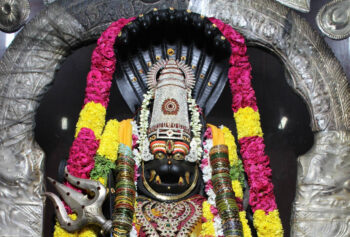 The Divine Mother Śrī Pratyaṅgirā Devi in Her most aggressive avatar is referenced as Mahā Pratyaṅgirā or Atharvaṇa Bhadrakāḻi, the protector of the Atharvaṇa Veda and every one it’s secretive incantations. Worshiping Divine Mother trough Pratyaṅgirā Devi  Puja is said to bring huge benefits and if performed for a longer time, may help the devotee overcome all difficulties in life, remove all types of afflictions caused by planetary formation in one’s horoscope, removal of all types of black magic and incantations performed against the person, as well as for fulfillment of all material and spiritual desires.She falls under the ugra (ferocious) devatā category, just like Kāli, Vārahi and the mahāvidyas etc. Pratyagirā Devi is a manifestation of the Supreme Parabrahma Svarūpini Lalita Devi who is the Śiva-śakty-aikya-rūpiṇī (Lalitha Sahasranama 999). Śrī Pratyangirā Devi has the head of a male lion and body of a woman, depicting the union of Śiva and Śakti. Śrī Pratyangirā Devi, is ´referred as Narasimhika, feminine energy form of Lord Narasimhadev, the lion headed avatār of Lord Viṣhṇu. It is written that the mere laughter of Shrī Pratyaṅgirā can align the stars and galaxies. Such is Her power and invoking Her grace, is to utilize tremendous force against enemies for protecting one’s own life or that of close family and friends from near death situations, deep debt, very chronic diseases, unfair competition and huge business losses forcing closure or bankruptcy etc. Shrī Pratyaṅgirā is seen as an aspect of Shrī Bhadra Kāli, as well as Siddha Lakṣhmi. She is therefore a combination of abundant wealth as well as humongous strength and force to overcome any challenges.
She is a very aggressive form of the Divine Mother and it is not safe to recite this mantra without a proper initiation as sadhaka might not be able to withstand the energies of Divine Mother. Her Ugra form is only to clear our deep-rooted sticky karmas and make us proceed towards Moksha. Śrī Pratyaṅgirā Devi mantras are generally given to the Śrī Vidya devotees who are facing many difficulties and in need of protection. By default, Śrī Pratyaṅgirā Devi will protect all Śrī Vidya devotees upāsakas. Pratyangira Devi is the most powerful form of Devi and she always protects devotees and when properly invoked prevents all kinds of harm to Devotees. She is within each and each being altogether planes of existence, and there to be awakened within .Devi Pratyangira is taken into account together of the very Ugra (Ferocious) manifestations of Devi . She is additionally related to Shoolini Durga and Bhadrakali Mata. This Homam is extremely powerful and it protects one mainly from sorcery and evil spells that are cast. There are different stories in shastra about the origins for Pratyangira Devi. Other story say that when all the Gods were helpless to pacify Lord Narashima, the three Goddess Parvathi Devi, Saraswathi Devi and Lakshmi Devi created Pratyangira Devi and sent her to fierce Lord Narashima, who was destroying the entire world after he extinguished the Demon King Hiranyakashipu.
One story says that there was two rishis, Prathiyangira and Angira, who were meditating .After some time they found a goddess through a Moola Mantram .That Goddess was nameless. So she decided to honor this two Rishis by naming herself after rishis Prathiyangira and Angira .So it came to be known Pratyangira Devi.
Since this powerful deity(who pacified the lion-man incarnation of Vishnu) is claimed to be easily propitiated, when the right sacrifice offer. She is claimed to grant the boon of any nature, her worship was normally kept as highly in secrecy for many centuries because the sages thought of keeping her far away from falling into the wrong hands. It had been claimed within the epic Ramayana that the invincible son, Megnath, son of Ravana would have brought victory to Ravana by defeating his enemies Lord Rama and Laxmana if the third night of Yaga wasn’t disrupted by the Hanumanji.
On many occasion you can see her as dark complexioned, terrible in aspect, having a lion’s face with reddened eyes and riding a lion or wearing black garments, she wears a garland of human skulls; her hair strands on end, and she or he holds a trident, a serpent within the sort of a noose, a hand drum and a skull in her four hands. She is additionally related to Bhairava, and she or he features a variant form, Atharvana Bhadra Kali.