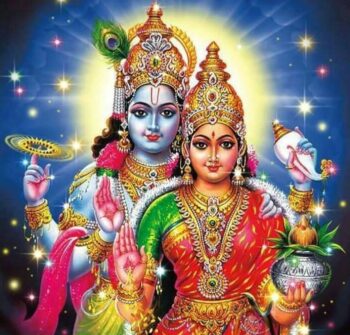 Goddess Laxmi and Lord Narayan are considered to be the epitome of the fulfillment of all desires and to live a comfortable lifestyle. You want  wealth and protection ?Then do   Laxmi Narayan Maha Yaga.

By worshiping Goddess Lakshmi-Narayana, the prosperity, well-being/long life is easily attainable and ambitions with ease. Every wish is fulfilled by doing the Lakshmi Narayana Mahayagya and by worshiping the world’s Palanhar Srihari Vishnu and Goddess Lakshmi, the goddess of prosperity. A person can attain all his/her material comforts wishes.

It is the belief of people that Lakshmi Narayan fulfills their desires, he gives them happiness, prosperity, wealth, and well being. The chanting of the integrated mantra of the mighty Lord Vishnu and Mother Lakshmi brings blessings of Srihari from all directions.

Why is Lord Vishnu also known as Narayana?

Narada Muni is considered to be the greatest devotee of Lord Vishnu and he used to call Lord Vishnu as Narayana. Aside from this the lord Narayana is also called by the names Ananthanarayan, Lakshminarayana, Seshanarayan. But the basic thing is that in all these names Narayan has been associated the most because Narayana means “one who lives underwater”.

The emergence of Goddess Lakshmi

Goddess Lakshmi came out of the churning of the sea during the time of Samudra Manthan. Goddess Lakshmi chose to marry lord Narayana by herself as he was the lord of the ocean and always lived inside the water. Goddess Lakshmi is a major goddess of Hinduism. She is the consort of Lord Vishnu. Along with Parvati and Saraswati, she is one of the trinity and is considered the goddess of wealth, health, peace, and prosperity.

At the time of creation, Brahma created the human race with a Yagya and said that it will be the progress of human beings only through the Yagya and only the sacrificial fruit will be obtained from the yagya. The Yagya continued to attract devotees for the Chhappan bhog offered to God.

Yagya is the manifestation of Lord Narayana. Performing a Yagya would yield favorable results. Karma, Artha, Kama, Moksha are the attainments of all four efforts.

It is believed that Yagya has mainly three parts. Satsang of saint scholars, worship of gods, reception of guests is part of the Yagya. According to Vedic scriptures, we have recognition of 33 crore gods. All the deities in the Yagya are invoked through mantras. That is why the sins of before-life and after-life are destroyed by revolving the Yagya Mandap. The name Lakshmi-Narayan is combined as a pair for the Hindu god, Vishnu or Narayana, and his consort Bhagwati Lakshmi.

Yagya is necessary to make the rain and the environment pure and positive.