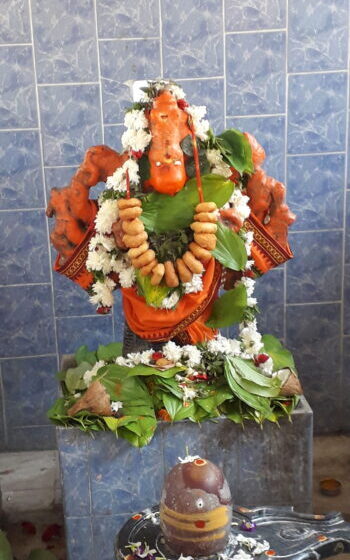 Hanuman is considered a symbol of strength, intelligence, learning, bravery, and fearlessness. In the crisis, only Hanumanji is remembered. and Hanuman Puja   is performed .

Ram bhakta Hanuman Ji is considered to be the most influential deity of the Kalyuga and the 11th Rudra avatar of Lord Shiva. According to the mythology, the time when the Asuras and the Gods churned the ocean for the elixir. Then the gods and asuras started fighting among themselves for nectar. After this, Lord Vishnu took the form of Mohini. After which Hanuman Ji was born from Anjana’s womb. Vanraj Kesari and Anjana did severe penance of Lord Shiva. Pleased with his penance, Lord Shiva gave him a boon that he would be born from Anjana’s womb. Hanuman Ji is also known as Vayuputra. Because the time when Hanuman Ji swallowed the sun. At that time Indra attacked him with Vraj. After which Pawan Dev stopped the flow of air from the three worlds. After this, all the gods gave blessings to Lord Hanuman.

Hanumanji is one of the eleven Rudra Avatars of Lord Shiva. His worship is a simple cultivation method similar to that of Shivarchan. Mantras etc. are changed as per the requirement. Being completely satvik, one should worship Lord Hanuman otherwise he may have to suffer devotion. Generally Hanuman offers Chola to the idol. Chola is offered on Tuesday to get the blessings of Hanumanji and on Saturday to reduce the suffering of Shani Maharaj’s half-and-half, adhaiya, Dasha, and inner feelings.

Generally, these days are valid, but there is no prohibition of offering Ravi, Mon, Mercury, Guru, Venus on other days.Mixing vermilion with jasmine oil in a chola, rubbing it on the statue, rubbing it, and offering silver or gold work.

There are some things to understand in this process. The first thing is to be careful while offering the Chola. Wear untouched (pure) clothes. If a special wish is fulfilled, then the first slaughter can be offered until the wish is fulfilled, and then the world order can be offered. Keep in mind, complete work should be determined. The observance of satvik life, mental and physical celibacy is mandatory.

Cultivation can be done according to need. There are also Shabar mantras, but it is appropriate to use them under the supervision of Gurudev. Absolute magic does not give any accomplishment, so Devkripa becomes certain by doing it with patience, reverence, and faith.

It is written in the scriptures:  ‘Japat Siddhi-Japat Siddhi‘ means keep chanting, keep chanting, Siddhi will definitely be attained. In Kali Yuga, the deity is Hanumanji. With the practice of Hanuman puja, meaning, religion, work, salvation can all be fruitful.

The birth anniversary of Hanuman is celebrated as Hanuman jayanti. On this day we offer Chola to provide positive energy, this gives us freedom from obstacles. Hanumanji is described as an unmatched confluence of devotion and power.

According to pandits and astrologers, on the full moon of Chaitra month, the eleventh Rudra of Lord Shankar was born as Hanuman’s  for the purpose of serving Lord Rama.

Video Provided with your name ,Nakshatra,Rashi,Lagna and Sankalpa.