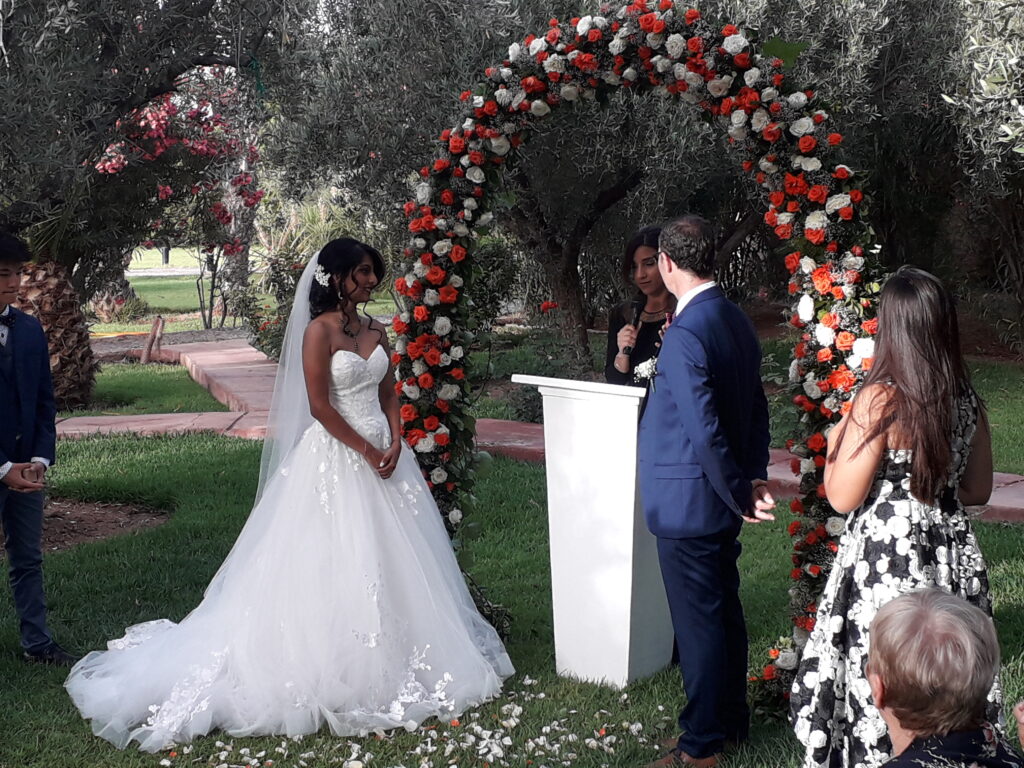 There is a famous saying in India that a Hindu marriage is not just about a bond between two people; it is a marriage between two families. Typically, Hindu marriages are the most colorful, auspicious and heartwarming event consisting of 6 to 7 ceremonies and rituals

In a Hindu wedding, the soon-to-be-wed bride and the groom have to complete these rituals and traditions as per the Hindu shastra. It is often a 4-5-day affair with close family and friends. Though Hindu weddings are filled with Joy, fun, and beautiful yet redundant rituals, think about having your dream Hindu marriage on a foreign land such as Portugal. Portugal’s country is famous for its beaches and of course Football.

Prateek and Ashi, this Hindu couple, wanted to have a royal wedding in Lisbon, Portugal. The couple wanted it to be a three-day wedding affair with close friends and family only. The wedding planner arranged all the wedding events as per the Hindu traditions and rituals.

The couple decided to have a destination wedding in Portugal for several reasons. The first and foremost reason is that Prateek is a huge football fan and admire Cristiano Ronaldo and Ashi as an admirer of beaches, wine, and historical monuments and artifacts. They both adored the thought of tying the knot in Portugal. From Hindu pundit to traditional Indian music, everything was perfectly arranged by the wedding planner.

The couple arrived in Lisbon and checked in at Hotel Avenida Palace. The couple desired to explore the city. Prateek and Ashi first visited the impressive football stadium ESTADIO DA LUZ (BENFICA), the famous Tower of Belem, Sao Jorge Castle, and Carcavelos beach. The couple desired to capture a few photographs featuring the beauty of Lisbon.

Later in the evening, the couple invited the guests and family for dinner at the hotel and thanked the family members and friends for coming.

The next following day, Prateek wished for a pre-wedding photo-shoot at Praia de Guincho. It was a pleasant day for a beach photo-shoot. The couple invited their family and friends as well for enjoying a picnic day.

After spending an entire day at the beach in the evening, the Sangeet ceremony was arranged at the hotel. In this ceremony, the couple’s family and friends celebrate the bond of love with each other. Both the families danced and sang songs together. The term sangeet means Sung together, and Prateek and Ashi’s sangeet ceremony is the perfect resemblance of the term. The couple also graced the occasion with a beautiful dance performance. It was a memorable day for all. At last, everybody ate dinner together and shared love and happiness.

The next morning it was a lovely day in Lisbon. The couple commenced the day with a small puja arranged at the hotel itself. The couple took blessings from the Hindu God and goddess and the elders of the family. Following the puja, the Haldi ceremony was arranged in the garden. In this ceremony, both the families applied Haldi to the bride & the groom to prepare them for the big day and enhance their beauty. The Haldi ceremony has a deep meaning behind it. It is said that the yellow color of turmeric is considered to bring good luck upon the future of the bride and groom and protect the couple from any harm and evil.

On the same day, later in the evening, the Mehendi ceremony was arranged in the garden area. All the women from both the families were present at the ceremony. The bride was sitting with the Mehendi artist, who was applying Mehendi in her hand. The beautiful and artistic designs of Mehendi in the bride’s hand are referred to as sacred symbols of marriage. The other women also participated in the Mehendi ceremony by applying mehndi in their hands and turning the Hindu wedding in Portugal colorful and graceful. The Mehendi ceremony commonly includes dance and music as well for making the occasion fun and joyful.

The Mehendi tradition is usually an all women ceremony. In contrast, the males of both the families were celebrating at the bachelor party. This wedding event is considered as the last party for the groom as a bachelor. It involves dance and music and delicious food. At the bachelor party, all the males of both families interact with each other and build a strong bond. With his male family members and friends, Prateek celebrated the relationship of brothers and marked it as a memorable day.

At last, the big day for our romantic couple has arrived. It was the wedding day of Prateek and Ashi. The hotel staff decorated the hallways with the banners of Prateek weds Ashi. The wedding arrangements were made at the PALACE OF QUE LUZ. The couple was getting dressed for the auspicious wedding ceremony for a special wedding in Portugal

Prateek was dressed in a cream-colored Sherwani paired with golden Jutti or mojri, commonly referred to as shoes. Prateek also wore an off-white turban over his head as per his family traditions. In contrast, Ashi was wearing a red dress commonly known as Saree and paired it with massive jewelry around her neck, earrings, maang tikka over her head, Nathni in her nose, and Payal in her feet.

Prateek was waiting for Ashi at the mandap. The mandap is a place arranged for the wedding ceremonies and is decorated with flowers and ribbons.  When Ashi walked down the aisle, Prateek and Ashi sat underneath the mandap around the holy fire, commonly referred to as Agni. The Sahadev  Pandit commenced with mantra and Ganesh puja.

There are numerous rituals and traditions in a Hindu wedding such as The Pheras, where the couple take circles around the holy fire and make seven Vachans to each other. The wedding vows are often referred to as Vachans in India.

Another ritual is where the groom ties the knot and places a necklace around the bride’s neck, which is known as Mangal sutra in India. Also, the groom put a red powder, popularly known as Sindoor, over the bride’s head. The Mangalsutra, Sindoor, Pheras, and Mehendi are considered as the symbols of marriage in India.

Prateek and Ashi followed all the necessary rituals and traditions and became husband and wife.  Rituals as Jutta chupaai and finding the husband’s name hidden in the bride’s Mehendi tradition and brides wed off, commonly known as Vidaai in India, was also followed at the wedding.

The Vidaai tradition is the most tearful and heartwarming ritual at an Indian wedding. The bride, her parents, were emotional for the goodbye ceremony. The bride bid her farewell to her parents, and the couple took blessings from the elders and said their goodbyes for starting a new phase in their lives.