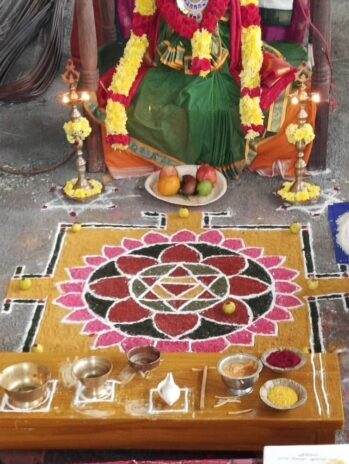 Yantra is a special type of fixed geometric shape that is the physical form of mantras.If a particular mantra or power is molded into a form, then the machine is produced.Special use of shapes, lines, and points in the device.If any line, shape, or point is wrong, meaning can be lost.There are two types of instruments – the first with lines and figures and the second numbered instruments.Shaped instruments are more powerful than numbered instruments.It is considered auspicious to start Shri Yantra Puja and establish Shri Yantra on Friday . It should be washed in clean water inauspicious time on Friday and bathed with panchamrit and Ganga water and put in yellow cloth at the place of worship. After this, offer raw turmeric and flowers on the Shri Yantra. After this, apply the droplets of pure water of Ashwagandha and recite Sri Suktam by lighting a lamp of pure ghee in front. Shri Yantra should be worshiped every Friday. It is said that Shri yantra is a medium through which all negative energy in the life of a human being is removed. After making Shri Yantra, one should start worshiping it in auspicious time and after that, it should be worshiped regularly. Shri yantra is considered to be the instrument of Goddess Lakshmi. There is a law to worship this Yantra to get the grace of Goddess Lakshmi.According to religious beliefs, the Shri yantra of the crystal is best to please the mother Lakshmi. Shree means money and yantra means, that is, this instrument has been considered as the means of obtaining money. It is said that by worshiping it lawfully at home, office, or place of worship, positive energy resides there.

According to astrologers, it is necessary to please mother Lakshmi to get her blessings and it is also said that these goddesses of wealth are not easily pleased. Goddess Maa is Lakshmi’s instrument. According to a legend, once Lakshmi Ma became angry and went to Vaikuntha. Without them, there was a ruckus on the earth. Then Devguru Brihaspati suggested the solution of ‘Shri  Yantra’ installation and worship to attract Lakshmiji. Then Goddess Lakshmi was forced to come to earth.

What is the glory of Shri yantra?

This whole world knows that the blessings of mother Lakshmi are necessary for wealth and prosperity, but how the grace of mother Lakshmi is found, very few people have understood. Today we are going to tell you the surest and divine way to get the blessings of Maa Lakshmi.The most famous and powerful machine in the world is the Shri Yantra. Although consider Shri yantra as a symbol of wealth, it is also a symbol of power and uncommon accomplishment.With the use of Shri Yantra, you get prosperity, prosperity, and concentration.With the right use of Shri yantra, every kind of impoverishment can be removed. Shri Yantra is of many types – flat, embossed, and pyramidal.Worship Sri Yantra daily, you will get amazing powers and immense wealth.It is mentioned in the mythological scriptures that every day the philosophy of Shri yantra starts getting the benefit of its amazing powers. Therefore, humans should take advantage of the philosophy and worship of Shri yantra every day. Not only this, by chanting the mantras of Mahalakshmi or worshiping Mahalakshmi and Shri yantra on Friday, Mother Lakshmi gives delightful powers and immense wealth to her devotees.Let’s know how to get those amazing powers and lots of wealth: Worship daily by placing Sri Yantra in a temple or vault.By worshiping this Yantra, man gets wealth, prosperity, fame, fame.Stop work begins. Business interruption ends.By its grace, man receives Ashta Siddhi and “nine funds” treasures.Lakshmi is pleased by chanting 12 recitations of Sri Suktam on a lotus garland every day.

The Ramcharit Manas clearly mentions through the chaupai that the Kaliyuga is simply the name Adhara, which means the mantra. You can fulfill every wish only by chanting. According to Pandit Mithilesh Dwivedi, Aaradhya Devi of Sri Yantra is considered as Shri Tripura Sundari Devi. The Sri Yantra made on the day of the month of Pausha and that too on Sunday is very amazing and gives the highest results, but if it is not done then you can build this device on the day of Sankranti of any month or on the eighth day of Shukla Paksha. Can. This device should be made on copperplate (copper plate), silver-letter or gold-letter only.According to Pandits, there is another mythological story about the impact of Sri Yantra. It is believed that once Lakshmiji went to Bankuth, saddened by the earth. As a result many problems arose on Earth. Then Maharishi Vashistha made efforts to obey Lakshmi with the help of Vishnu, but failed. Then she immediately returned to the earth after celebrating Jupiter and said that Shri Yantra is my base and my soul resides in it. So I had to come. It is believed that duly worshiping Sri Yantra brings happiness and salvation. It should be worshiped by facing the east. Then all your wishes will be fulfilled. Shri Yantra is considered to be the greatest and most fruitful device. Many people also consider Sri Yantra as the Lakshmi Yantra. According to religious belief, worship of Shri Yantra opens the way for wealth. Shri Yantra is composed by joining the triangle and the bottom part of the triangle is also made of the combination of the triangle, which is the “choker”, square when talking all the triangles together, there are 43 triangles and all the triangles are surrounded by 2 lotuses. There are two circles in between the lotus and the triangle, in which the first lotus is of Ashtadal and the second is of hexagonal.Lakshmi is pleased by keeping this Yantra in a temple or vault and worshiping it daily and chanting 12 recitations of Sri Suktam on a garland of lotus leaf every day. Shri Yantra is the only means of attracting Lakshmi Ji, the financial position becomes very good with Shri Yantra and all troubles are removed.

The Shri Yantra is a Yantra formed by nine interlocking triangles that surround and radiate out from the central (bindu) point, the junction point between the physical universe and its unmanifested source. It represents the goddess in her form of Shri Lalita Or Tripura Sundari,(the beauty of the three worlds Heaven, Earth, Hell).The worship of the Shri Chakra is central to the Shri Vidya system of Hindu worship.Shri Chakra, popularly mistaken to be a symbol of Lakshmi, is actually a representation of Lalita Mahatripurasundari, an aspect of Parvati Devi. Shri does not mean Wealth in this context. The Shri Chakra is often referred as the Chakra Raja.King of the Chakras.There is no better Yantra .This Yantra is mother of all Yantras. Ultimate Yantra .The Shri Yantra was possessed by Brahma, the creator of the Universe and praised by Vishnu the lord of the Earth.This Yantra is been  guarded by Vishnu,Shiva Ganesh and Surya so great is this Yantra.

It drives an individual on success path and clears the obstacles in financial sense.
It is the source of attaining all worldly desires and fulfilling all wishes.
Shri Yantra also gives mental peace and stability.
It gives good results in spiritual practice Sadhana.
It has the great potential to liberate an individual from the cycle of birth and death.