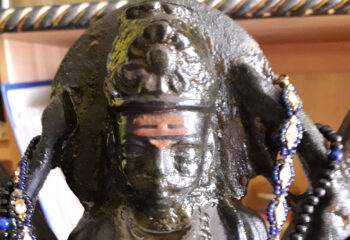 Shani Dev Puja is the way to please  Shanidev .Shanidev  is son of Suryadev  and Chaya Devi.He is the elder brother of Yamaraj, the Hindu god of death. Therefore, he’s also the brother of Lord Yamaraj and his Sister Yamuna Lord Shani plays the role of a judge, very similarly of his brother Yamaraj. The difference is that while Lord Shani rewards or punishes an individual as per their deeds during their lifetime, Lord Yamaraj rewards or punishes an individual after their death. Hence the simplest thanks to please both is to follow the trail of Karma or Duty in one’s life.People take Shani dev as a planet, but he is the biggest of all , he is the ultimate , he is the king.Surya – when Sun rises , he brings light to everyone.
Chandra- when he comes gives white light and silence to the night. Mangal – when comes bring discrepancies ,quarreling , rules health. Budh- when comes gives brain,speech,sports. Brihaspati – when comes brings wealth ,luck,spirituality and is guru of all devas. Shukra – when comes brings luxuries,arts, material things,demons and is guru of demons. Rahu –Ketu –when comes brings occult practices,foreign travels,suicide tendencies,unexplained diseases. Shani Dev – when comes all this planets enter their homes after seeing him. Shani dev has helped Hanuman many times, when Hanuman put fire in Ravaan’s golden empire Lanka, it began to glow as it was made of gold, it was then Hanuman asked help from Shanidev and asked him to put his sight on Lanka, Shanidev helped and put his sight on Lanka and whole empire became black . He is depicted dark in color, clothed in black,holding a sword, arrows and two daggers and mounted on a crow, which is Shani’s vāhana. Shani Deva has a very kind heart. He gets satisfied easily and bless you if you pray to him with a pure heart. Shani Deva teaches us the truth of life by giving all round experience. As Iron turns into Steel through the suitable process likewise by giving pains, delays, frustration, endurance, joy and pleasures Shani Deva matures us gradually. He Punishes us for our wrong deeds and rewards us for our Good karma.He is known as the greatest teacher and well wisher for the righteous as well the greatest judge for those who follow the path of evil, betrayal, backstabbing and unjust revenge.There is no other God ( in Planets ) comparable with Lord Shani Dev in terms of Blessings. Being Pleased He may turn Beggar in to King along with it, Lord Shani Dev grants success in Educational, Business, Wealth, Political, Social and Career Matters Lord Shani Dev also gives relief from diseases and grants a long life.Benefits of Shanidev Puja: Minimizing or overcoming the malefic influence .Removing troubles or moving the things which are slowly moving related to the Shanidev. Gaining material abundance, and spiritual prosperity(Shanidev leads us to spirituality)Destroying the bad karma and making a good karma.Removing obstacles if suffering from losses, when starting a new business or investments.Minimizing or overcoming the terrible health afflictions :Rheumatic diseases, Cancer, Diabetes, Kidney, Leprosy, Incurable Diseases, Blood Cancer, Madness and the Skin Diseases.Helps in political path,leadership,spirituality.Reduce Pitra Dosha. Lead you towards professional success. Provide relief from malice effects of Sadhe Saati and Dhaiya. Blesses you with health, wealth and happiness.This puja is very recommended to those who are experiencing results of the malefic influence of Mahadasha of Shani. Similarly, if the Antardasha (the sub period of Shani) is causing trouble then too this puja is suggested .Career, job and business related troubles can also be easily rectified by offering the puja.
If anyone is affected by false allegation or judicial proceedings against him, then praying to lord Shani may be a must to beat the matter