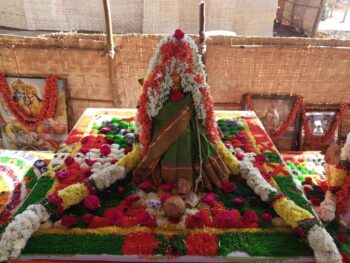 This is the special Puja which occurs once in the year and is famous as Navaratri Maha Puja .If you are Devi Bhakta then this Puja is must. The worship of Devi in Shri Chakra is regarded as the highest form of the Devi worship. Originally Lord Shiva gave 64 Chakras and their Mantras to the planet , to achieve various spiritual and material benefits. For his consort Devi he gave the Shri Chakra and therefore the highly coveted and the most powerful Shodashakshari mantra, which is that the equivalent of all the opposite 64 put together. One should approach the Divine Mother with zero reservations. One needn’t express one’s want, difficulties, complaints, problems to her for she knows your needs better and can offer you what you would like and at an equivalent time she will also protect you.

The word Navaratri is a Sanskrit word, which means ‘nine nights’. During these nine nights and ten days, nine forms of Shakti or Goddess are worshiped. The tenth day is famous as Dussehra. Navratri Maha puja comes four times a year. Paush, Chaitra, Ashada, is celebrated in Ashwin month from Pratipada to Navami. The nine nights of Navratri worship the nine forms of the three goddesses – Mahalakshmi, Mahasaraswati, or Saraswati, and Durga, whose names and places are respectively Nanda Devi (Vindhyavasini), Blood Antika, Shakambhari (Saharanpur), Durga, Bhima (Pinjore) and Bhramari (Bhramramba) says Navadurga. Navratri  Maha Puja is an important major festival that is celebrated with great enthusiasm throughout India.

Chaitra Navratri Maha Puja: The eighth day of Chaitra Navratri Maha puja is known as Mahashtami or Durgashtami. On the eighth day of the Shukla Paksha of Chaitra month, the worship of Maa Mahagauri, the eighth form of Maa Durga, is done through Vidhan Vidhi. Worshiping Mata Mahagauri on this day brings a person good luck, and there is no shortage of happiness and prosperity. All the sins of life are destroyed and by the grace of the mother, she is also freed from all the sufferings. Today, there is the law of worshiping the girl on the day of Maha Ashtami. It is said that girls are the personified form of Goddess Durga, hence Virgo worship is done on the Ashtami of Navratri.

Let’s know what is the worship method, Muhurta, Mantra, and the importance of Mother Mahagauri on the day of Maha Ashtami.

Who is Mother Mahagauri

Mother Mahagauri is a very keen varna. She wears white clothes and white jewelry, hence she is also called Shwetambar Dhara. The vehicle of Maa Mahagauri is bull i.e. Vrisha, hence she is also called Vrisharuedha. Mahagauri, a mother with four arms on a tree, holds a trident in one right arm and damru in one left arm. At the same time, one right arm is kept in Abhaya mudra and the other left arm is in varada mudra.

According to mythology, Maa Shailputri was very keen and beautiful at the age of 16, hence her name was Mahagauri. But there is another legend associated with Mahagauri. Once Goddess Parvati became angry with Lord Shiva and went away from Kailas. His body became very observant due to years of spiritual practice and being absorbed in rigorous penance. When Lord Shiva met him looking for him, he was surprised to see. Then she gave the boon of Gaur varna to Mata Parvati since then Mata Parvati started to be called Maa Mahagauri.

The importance of worshiping Maa Mahagauri

Maa Mahagauri is worshiped to clear the clouds of crisis and to get rid of sins. Worshiping Mahagauri brings happiness and prosperity to a person.

After the aarti of Mahagauri girls in the form of mother Durga. In this, you can worship an equal number of girls from 1 to 9. Make them sit on a pedestal and wash their feet with water. After this, worship them with aarti. Allow them to eat homemade dishes. After the meal, touch their feet and give away the donation and give away.

There are nine goddesses:

Shailputri – It means the daughter of mountains.

Kushmanda – it’s meaning – the whole world is on their feet.

Apart from this, nine goddesses are also visited, which represent different forms and incarnations of Durga Devi.

Navratri is celebrated differently in different parts of India. This festival is widely celebrated in Gujarat. Navratri Maha Puja celebrations in Gujarat are known as Dandiya and Garba. It lasts all night. Dandiya’s experience is extraordinary. Garba, as a devotional performance in honor of the goddess, is performed before the ‘Aarti’ and the Dandiya ceremony thereafter. Among the main festivals of Bengalis in the state of West Bengal, Durga Puja has emerged in the most elaborate form in the Bengali calendar. The celebration of this wonderful festival is celebrated by publishing the majestic quarter of South, Mysore below, throughout the month.

The Navratri Maha puja festival is a representation of Goddess Amba (Electricity). The beginning of spring and the beginning of autumn are considered to be an important confluence of climate and sun effects. This worship has been going on since prehistoric times, before the Vedic era. Since the Vedic era of the sage, Gayatri Sadhana has been the main form of devotional practices during Navratri. In Shaktipeeth and Siddha Peeth of the Goddess, heavy fairs are held in Navratri. The importance of all Shakti Peethas of the mother is different. But the form of the mother is the same. Elsewhere, Jammu becomes Vaishno Devi near Katra. So somewhere, it is worshiped in Chamunda form. In Bilaspur Himachal Pradesh, the Mata fair is organized in the name of Naina Devi, while in Saharanpur, there is a huge fair of Mother in the name of Shakumbhari Devi.

The first three days of Navratri Maha puja are dedicated to worship Goddess Durga. This worship is done for his energy and strength. Each day is dedicated to a different form of Durga.

Fourth to the sixth day of Navratri

When a person overcomes the evil tendencies of ego, anger, lust, and other animal instincts, he experiences to avoid. This void is filled with spiritual wealth. For this purpose, the person worships Goddess Lakshmi to achieve all materialistic, spiritual wealth, and prosperity. The fourth, fifth, and sixth days of Navaratri are dedicated to worshiping Lakshmi – the goddess of prosperity and peace. Perhaps the person overcomes evil tendencies and wealth, but he is still deprived of true knowledge. Knowledge is necessary to live a human life even though it is rich with power and wealth. Therefore, Goddess Saraswati is worshiped on the fifth day of Navaratri. All books and other literature materials are gathered in one place and lit to face the deity, to invoke a goddess, and seek blessings.

The seventh and eighth day of Navaratri

On the seventh day, Saraswati, the goddess of art and knowledge, is worshiped. Prayers are offered with the purpose of seeking spiritual knowledge. A homam is performed on the eighth day. It is a sacrifice that honors Goddess Durga and leaves her. …

The ninth day of Navratri

The ninth day is the last day of Navratri. It is also known as Mahanavami. Virgo worship is done on this day. In which nine girls are worshiped, who have not yet reached the stage of puberty? These nine girls are considered to symbolize the nine forms of Goddess Durga. To honor and welcome girls, their feet are washed. At the end of the puja, new clothes are provided to the girls as a gift.

Burning of Ravana on Dussehra

In the Lanka war, Brahmaji asked Shri Ram to worship Chandi Devi for Ravana’s slaughter and to please the goddess, and according to the said, one hundred and eight Nilkamal was arranged for Chandi Puja and Havan. On the other hand, Ravana also started Chandi recitation with the desire for victory in the greed of immortality. Indra Dev brought this thing to Shri Ram through Pawan Dev and advised that the Chandi text should be completed as soon as possible. Here in the Havan material, a Neelkamal from the place of worship vanished from the elusive power of Ravana, and Ram’s resolve began to appear broken. The fear was that the Mother Goddess should not be angry. The arrangement of the rare Neelkamal was immediately impossible, then Lord Rama readily remembered that I am called ‘Kamalanayan Navakancha Lochan’, so why not offer an eye to fulfill your resolve and take out an arrow from your shoulder as soon as Lord Ram When the eyes were ready to be removed, the goddess appeared, holding her hand and said – Ram, I am happy and blessed Vijayashree. At the same time, in the service of the Brahmins who are performing Yajna in the Chandi text of Ravana, Hanumanji took the form of a Brahmin child and joined the service. Seeing selfless service, the Brahmins asked Hanumanji to ask for the groom. On this, Hanuman said politely Lord, if you are happy, then change one letter of the mantra with which I am sacrificing. The Brahmins could not understand this secret and said Aastu. Jayadevi in ​​the mantra … In the Bhurtiharini, instead of ‘H’, say ‘A’, this is my wish. Bhurtiharini means that the suffering of beings and ‘Karini’ means the suffering of beings, Due to which the Goddess became angry and got Ravana destroyed. Hanumanji Maharaj changed the direction of Yajna of Ravana by making ‘A’ instead of ‘H’ in the verse.

Benefits of Navaratri Puja: She can fulfill your desires,give you auspiciousness ,give you protection,remove diseases,defeat your enemies,give you accomplishments,fill you with the bliss,grant you wealth and fame.There is nothing what she will not do for you.