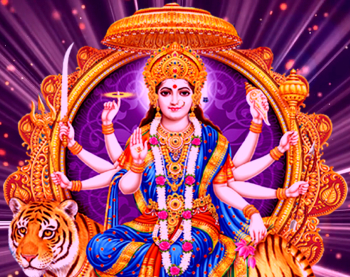 Maha Nava Chandi Yaga is the great Yaga i conducted with the chanting of the Durga Sapthasathi Mantra(Devi Mahatmayam) also known as Chandi Path.The nine sorts of Maa Durga are worshiped with nine different offerings.. Here are the nine forms of Goddess Durga and therefore the special offerings offered to them.

Goddess Shailputri is that the first manifestation of Goddess Durga. She holds a Trishul in one hand and a lotus within the other and rides a bull called Nandi. Goddess Parvati was born because the daughter of Himalaya and in Sanskrit, Shail means the mountain, thus she is understood as Shailputri. Cow ghee is offered to Goddess Shailputri. By offering Cow ghee our life become free of diseases and illness.

The second day of Navaratri is devoted to Goddess Brahmacharini. The goddess walks bare feet with a rudraksh mala in one hand and a sacred Kamandalu within the other. The meditative sort of this goddess symbolizes Goddess Parvati when she engaged in her deep meditation to please Lord Shiva.Goddess Brahmacharini is offered sugar for the longevity of the relations .

The third day of Navaratri is devoted to Goddess Chandraghanta. She may be a fierce 10-armed goddess with a crescent moon her forehead, which provides her the name Chandraghanta. Her vahana is tiger and she annihilates destroy evil and wicked persons.The ferocious goddess is pleased with Kheer. She is known to drive away all pains.

On the fourth day of Navaratri is dedicated to Devi Kushmanda. The name Kushmanda springs from three words – ‘Ku’ (little), ‘Ushma’ (warmth or energy) and ‘Amnda’ (egg), which suggests the creator of the universe.Malpua is offered to Maa Kushmanda to enhance their intellect and decision making ability.

Goddess Skandamata who is worshiped on the fifth day is additionally referred to as Panchami. Skandamata may be a four-armed deity, who carries a lotus in two of her arms with a sacred Kamandalu and a bell within the other two. She also carries a touch Kartikeya on her lap and since of this Kartikeya is additionally referred to as Skanda. She is seated on a lotus.Bananas is that the favorite fruit of Goddess Skandamata.

Sixth day of Navratri is devoted to Goddess Katyayani, who may be a sort of Shakti. Also referred to as the warrior goddess, Katyayani is taken into account together of the foremost violent sorts of Goddess Parvati. She has four arms and carrying a sword. She is that the daughter of Sage Katyayan and rides on a lion.Honey is offered to Devi Katyayani.

Seventh day of Navaratri is devoted  to  Goddess Kalaratri. As per legends she sacrificed her complexion and embraced a dark complexion to kill demons. She may be a four-armed deity who rides a donkey, carries a sword, a trident, and a noose. She has a third eye on her foreheadthat is believed to contain the entire universe.Jaggery is offered to Devi Kalaratri for relief from pains, obstacles and convey happiness.

Eight-day of Navaratri is devoted to Goddess Mahagauri. She may be a four-armed deity who rides on a bull or a white elephant. She carries a Trishuland a damru in her hands.Goddess Mahagauri is offered coconut .

The ninth or the ultimate day of Navaratri is  devoted to  Goddess Siddhidhatri. She is projected as a four-armed deity sitting on a lotus, holding a mace, discus and a book and lotus in her hands. This form of Goddess Durga signifies perfection.To Devi Siddhidatri sesam seeds are offered so that she can bless us with safety and security from unnatural events.

Benefits of Performing Maha Nava Chandi Yaga:Victory in all aspects (especially in material gains).Fame and removal of Dangers(accidents,deadly Cancer).Defeat of Enemies ,Submission of Enemies,Humiliation of Enemies.Spiritual and Mental Strength.It transforms defeat in victory misery in happiness and bad luck into good luck.Repeated conducting of Chandi Homam brings about a positive transformation in society.It wards off ill effects of evil forces.This Homam removes the malefic effects of all planets, especially Rahu and Ketu.Chanting the Devi Mahatmyam and participating in a Chandi Yaga by a person who is regular in his daily pujas (Nithya Karma) helps him to attain Devata Siddhi, Ishta Siddhi, Karya Siddhi,Mantra Siddhi.