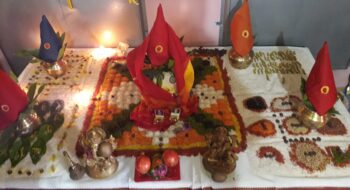 Laxmi Puja is celebrated on the new moon day of Ashwani month. On the night of the new moon, Lakshmi travels everywhere and begins to find a suitable place for her abode. Lakshmi likes to live in a house where there are virtuous, dutiful, temperate, pious, devout, and forgiving men and virtuous women. Lakshmi, the symbol of prosperity and auspiciousness, is worshiped on this night.

At the time of Shri Laxmi Puja, Shri Lakshmi is placed on the Ashtadal lotus or swastika. After that, Lakshmyadi offers cow’s milk kawhi made by adding cloves, cardamom, and sugar to the deities. After carrying coriander, jaggery, salt lahya, pattase etc. to Lakshmi, apart from this, currency notes, coins, and gold ornaments are also worshiped at this time. In ancient times, this puja was called Yaksharatri, Deepmala, Deep Pratipada Utsav, and now Diwali.

Sri Sukta is also recited in many houses. According to the ancient context of Lakshmi Puja, Kubera Puja was performed the night before Lakshmi puja. Kubera is considered to be the treasurer of Shiva and the lord of wealth. Every puja needs the person to recite the mantras with a pure-heart.

The original cultural event was the worship of Yaksha and his lord Kubera by lighting lamps. However, with the Vaishnava sect gaining sanctuary during the Gupta period, Lakshmi was first worshiped along with Kubera. Many idols from the Kushan period have been found in excavations at various places. It shows Kubera and Lakshmi together. Kubera in some idols shown with wife Iriti. It is believed that Kubera and his wife Iriti were worshiped in ancient times. Eventually, Iriti was replaced by Lakshmi and later Kubera was replaced by Ganapati.

For Lakshmi Puja, they take out rangoli and put rice on it. Put a bowl or a plate on it. They worship him with gold ornaments, silver coins, and various other essential ornaments. Special sweets are made in the house for puja. After the puja those sweets are offered to everyone.

Enthusiasm in the business community

Lakshmi Puja is also of special importance in the business community. As the new year of reckoning begins after Lakshmi Puja, Lakshmi and Kubera are worshiped by decorating the shops.

Kersuni is important on the day of Lakshmi Puja. Along with Lakshmi Puja, she is worshiped as Lakshmi by buying new Kersuni which is required for cleaning. They carry water, turmeric, and kumkum on it and start using it at home. In Nashik, like other vendors of Diwali, Kersuni sellers also come from far off places and sell Kersuni from year to year.

Deepavali is an exhilarating and joyous festival for the gain of divine wealth, Lakshmi Kripa, a celebration of victory, and this wave of joy infects the entire nation.

The five-day festival of Diwali is one of the most important festivals that enhances the spirit of prosperity in society. Be it poor or rich, beggar or king, farmer or industrialist, factory worker, each and every person has their own Lakshmi puja. Everyone wants Lakshmi to be happy with their hard-earned money. Where there is good fortune, there is bliss, where there is a family atmosphere of sattvic bliss, excitement and where there is excitement, there is conscious light, it makes lord happy.

Saint Dnyaneshwar says, Laxmi, communicates with wealth, and would live in a virtuous and dutiful, sober, forgiving environment, and so on. Wealth is only going to visit the divine people with powerful wealth, powerful nation-building attitude, and positive mind-set.

Diwali, the festival of Diwali, is celebrated on the new moon day of Kartik month. This time, on October 27, the festival of Diwali will be celebrated across the country. Goddess Lakshmi is worshiped on this day. This day is considered very auspicious to get the blessings of Goddess Lakshmi. It is believed that on the day of Diwali, Mother Lakshmi comes to the house in the light of lamps. Diwali is also known as “Prakash Utsav”. On this day people wear new clothes and get dressed up for welcoming Lakshmi to their decorated home. It is also believed that on the return of Lord Shri Ram to Ayodhya, people welcomed him by lighting ghee Diya’s. The night of Amavasya was illuminated.

How to please goddess Lakshmi

The ways to please Maa Lakshmi are very easy, but most people are not aware of it. To please Goddess Lakshmi, many remedies have also been given in the scriptures, which can be easily found by the grace of the mother. It is essential to learn some of these selective measures to receive Lakshmi’s grace. The person conducting the puja must follow vegetarian diet and take bath in holy-water before beginning the puja rituals.

If you chant the mantra at least 108 times, then you will be blessed by Goddess Lakshmi.

After Laxmi Pujan on Diwali, conch, and bells should be ringed in all rooms of the house. This will remove all the negativity of the house. On this day, give water to the Peepal tree. By this, Saturn’s defects and Kalasarpa’s defects are eliminated.

On the occasion of Diwali, keep yellow clams in the worship of Mahalaxmi. This will remove all the money related issues. On the day of Diwali, offer full rice on the Shiv ling. During Lakshmi Puja, we should keep turmeric lump essential and after worship keep it in your money locker/precious items drawer.

The joy in the hearts of people on the day of Lakshmi puja is in-comparable. It unites every person who participates in the pooja, the entire family gathers together to celebrate the occasion. Many relatives visit decorated houses, and sweets are cooked, served to everyone.

Diwali is seen as the festival of Goddess Lakshmi, many myths related to Goddess Lakshmi have been prevalent. Devdatta Patnaik about the myths associated with Goddess Lakshmi:Adorned with ornaments in red clothes, sitting on a lotus, holding a pot full of gold and grains, Lakshmi is the goddess of happiness, prosperity, the power that culture derives from nature.He is compelling and playful. Keeping them close is a constant struggle. Rare and valuable elephants shower water on them.Next to him sits his twin sister Alakshmi, the goddess of poverty, misery, and misfortune.Happiness and sadness.With power, happiness and prosperity comes the waste generated by enjoyment, in the form of viscous material which is called halahal. According to some stories, it is the vomit of Vasuki Nag during sea churning. Waste is an essential part of any manufacturing process.In the same churning during which Lakshmi appeared, Halahal also came. Everyone wanted Lakshmi, but no one wanted to take any illusion.Shiva is indifferent to global things so he does not differentiate between desired and unwanted things.In their eyes, Halahal is not different from nectar, so they drink the whole poison and are called Neelkanth.

In Vaishnava literature, Halahal is associated with Alakshmi, the goddess of misfortune and “daridraya”, and the twin sister of Lakshmi.Just as no great thing is created without generating garbage, so is Lakshmi always with Alakshmi.Those who ignore these two twins take the risk by doing so. Alakshmi is the goddess of sorrow.Until they are accepted, luck always perishes with them. Lakshmi and Alakshmi:Both sisters Lakshmi and Alakshmi asked a businessman which of the two is more beautiful.The trader knew what would result in displeasing anyone.Hence the wise businessman said, Lakshmi, feels good coming into the house while Alakshmi goes out of the house.People say that this is the reason why Lakshmi is kind to businessmen.

Lakshmi is concerned with sweet while Alakshmi is related to sour and bitter things. This is the reason why sweets are kept indoors, while lemon and hot chili is seen hanging outside the house.Lakshmi comes inside the house to eat sweets while Alakshmi eats lemon and chili at the door and returns satisfied.Both are acceptable, but the reception is of one.

Lakshmi has two forms, Bhudevi and Sridevi. Bhudevi is the goddess of earth and Sridevi is the goddess of heaven. The first is associated with Urvara, the second with glory and power. Bhudevi rains in the form of gold and grain. Other powers give prosperity and identity. Bhudevi is a simple and supportive wife who serves her husband Vishnu.Shridevi is fickle. Vishnu always has to make efforts to keep them happy. If Vishnu is the king, then the Bhudevi kingdom and Shridevi are his crowns, his throne.