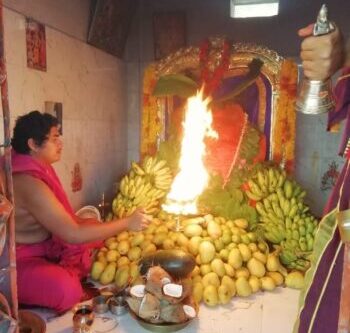 Hanuman is also considered to be the Shiva avatar of Rudra. Rudra is also the presiding deity and also the companion of Devaraj Indra. According to Vishnu Purana, the Rudras originated from Brahma’s Bhakti. Hanuman Ashtottara shatanamavali is the simple way to please the Hanumanji. The word ‘Hanuman’ signifies Brahma, Archana, and Ma Lakshmi. Hanuman was blessed by all the gods. He was also a servant and an ambassador, strategist, scholar, protector, speaker, singer, dancer, forceful and intelligent. Hanuman was also one of the three masters of classical music. The other two were Shardul and Kahal. The people of Karnataka believe that Hanuman ji was born in Karnataka. The ruins of Pampa and Kishkindha can still be seen in Hampi. In his Ramkatha, Father Kamil Bulke has written that according to some people Hanumanji was born in the apes. ‘Sangeet Parijat’ is based on the music theory of Hanumanji. It is said that the first Ramkatha was written by Hanuman ji and that too on the rock. This Ramkatha was written even before Valmiki’s Ramayana and is famous as Hanuman kataha.

There are also different views about how Hanuman ji was born. There is a belief that once Maruti saw Ajni in the forest, he was fascinated by it. She coincided with Anjani and she became pregnant. Another belief is that Vayu entered Anjani’s body through the ear and she became pregnant. According to another legend, Maharaja Dasaratha took away a portion of the fruit he had distributed among his queens from the Putreshti Yajna and dropped it at the place where Anjani was doing penance for attaining a son. Anjani became pregnant after consuming Havi and later she gave birth to Hanuman ji. The Charita described in many other Rama Katha is so different from that of Hanuman-Charit as described by Tulsi and Valmiki that it seems to be completely false and imaginary. The Tantrikas worship Hanuman as a Shir, Panchshir, and Ekadashi Shir, Sankatmochan, Sarv Hitarat, and the giver of Riddhi-siddhi. According to Anand Ramayana, Hanuman ji is counted in eight immortals. The other seven are Ashwatthama, Bali, Vyasa, Vibhishana, Narada, Parashurama, and Markandeya. The troubles are solved with the mere remembrance of Shri Ram envoy Pawansut Hanuman.

Meaning behind the various names of Hanuman, he is known as Sarvamayavibanjana, which also means the god who brings clarity to the mind and erases all kinds of illusions. He was also called Chiranjeevi, which explains his immortality. It was believed that Hanuman had immense power and it was impossible to win against his power. Lord Hanuman was called ‘Vanara’ it was highly debatable as it means ‘Monkey’, he was called a compared to an animal which is also an early species of humans. So was Hanuman a part of human evolution? The name was actually given as his jaw was disfigured by being hit by Lord Indra. When Lord Hanuman went towards the Sun. It looked really attractive to the Lord and he wanted to eat it. Pavanputra was another famous name given to him, ‘pavan’ means ‘wind’, ‘putra’ is ‘son’. He was known as the son of wind. He was very fast and has physical strength incomparable to anyone. Shanta is also lord Hanuman’s name, which was given to him because of his calm and composed behaviour even in times of panic. He chose to make intelligent decisions during all such times.

On the day of Hanuman Jayanti, chant his mantra in front of Panchmukhi Hanuman’s temple or picture and afterward. Give Guggul incense. If there is more trouble than serious crisis or enemy, then after chanting 27 thousand in seven days from Hanuman Jayanti, do mustard homam at night on the eighth day.It is necessary to give 270 sacrifices. The effect will be seen. The enemy will bow down and any weaknesses will be turned into strengths. When a weak person thinks of a strong entity it gives him or her an image to appreciate, an image to remember and to try to be god-like. To be powerful in life and achieve great things that require hard-work, efforts and self-reliance.

By doing a regular recitation of Shri Hanuman ashtottara shatnamavali, all the troubles and troubles of the person’s life are eradicated. Lord Hanuman becomes happy, when an individual is regularly reciting Shri Hanuman ashtottara shatnamavali. Shri Hanuman is always ready for the protection of the devotees. It is extremely auspicious if chanting the miraculous mantras of Hanuman Ashtottara Shatanamavali with 108 names of Shri Hanuman Ji Maharaj. To fulfill the desire of strength and accomplishment in life, worshiping Shree Hanuman is considered infallible. Shree Hanuman and his character are amazing inspirations to face and overcome every challenge or difficulty in life with determination, strength, energy, intelligence, character purification, dedication, valor, valor, perseverance in life. Hanuman has been known as Ram devotee, he always praised Lord Ram and followed the way shown by him. That’s why he is also known as Ramadhuta.

Sri Hanuman Chiranjeevi is also considered. By owning such amazing powers and qualities, he is revered as a waking deity. That is why Hanuman’s devotion at any time is considered to make one rich with body, mind, and wealth. It is extremely auspicious to initiate this special Hanuman mantra from Hanuman Jayanti. Due to its miraculous effect, happiness will start pouring in from all sides. After bathing, perform Panchapochar Puja of Sri Hanuman i.e. offering vermilion, gandha, Akshat, flowers, naivedya. After burning Guggul incense and lamp, Hanuman Mantra, Hanuman ashtotara shatanamavali, should be recited sitting on the Lal Asan and speaks with the desire to make life successful and fruitful. These mantras have great importance and the effects can be felt and observed by chanting regularly.

Whenever a god is remembered, the person thinking about the lord also feels the strength, power and intelligence that the lord possesses.