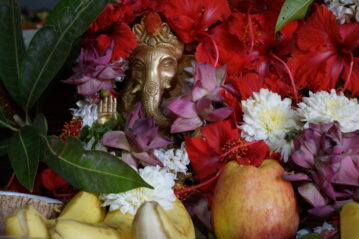 Lord Ganesha is considered the most powerful of all Hindu gods and goddesses. He has described many title sand epithets. He is also known as the “Haridra harta” remover of all hindrances. He is depicted as earthen pot-bellied with four arms and an elephant head, riding on a mouse with Ridhi and Sidhi in his two hands. Ganesh Chaturthi is a festival celebrated in Hinduism. Ganesh Chaturthi Puja festival is celebrated as Lord Ganesha’s birthday.The story behind elephant head of Ganesha. Lord Shiva once angrily cut off the head of his son Ganesha’s but then the head of an elephant was attached to his torso. In this way, Lord Ganesha regained his life. This day is celebrated as Ganesh Chaturthi.

The festival of Ganesh Chaturthi is of 11 days and is celebrated with great enthusiasm all over India. The Ganesh Chaturthi 11 days festival is the longest festival. On Ganesh Chaturthi, people bring clay idols of Ganesha to their homes and after worshiping them for 10 days, Ganesh immerses them on the 11th day. The festival of Ganesh Chaturthi is celebrated in Maharashtra as well as in various other states of the country.The festival begins with the installation of the earthen idol of Ganesha in the houses and temples on Chaturthi. (Chaturthi is a fourth Lunar day) People bring the Ganesha idol to their homes with great fanfare. A few days before Ganesh Chaturthi Puja, we can see lightning starts in the markets, and different types of Ganesha idols are made of clay. Everyone worships Lord Ganesh for the next 10 days in their homes and temples, Ganesha is worshiped beside other Gods and goddesses, people celebrate each day singing songs, dances, chants, performs aarti, and offers modak to Ganesha.Temples are decorated a lot these days, Lord Ganesha is remembered before starting any new work. Lord Ganesha is the most beloved God of all children. The children affectionately call him Ganesha. On the day of Annat Chaturdashi i.e. on the 11th day, with Ganesh Visarjan, Ganesha Lord is sent off and the next year is expected to come soon. Ganeshotsav is full of excitement and joy.We are amazed and proud to know that the message of health is hidden in this festive form. While understanding the health concept behind Ganeshotsav, it should be kept in mind that Tilak started Ganeshotsav 100 years ago for social building. This symbol of Ganesha is worshiped and revered in order to understand that it has life in it. It is very important today that these human feelings and beliefs remain alive. Such an effort of faith and devotion is definitely needed where the trust between people is declining. As long as Ganeshotsav is going on, the idol understands that there is life in it, not for his pleasure, but as a member of the household, he understands his favorite things, offerings, songs, and chants. During the time of the festival, people forget their grief and call all the members of the family together. There is no other festival that insists on controlling the mind and putting sorrows aside. The law also applies to our loved ones. There is no joy in being apart, but the big message of keeping together and enjoying with love and happiness these memories are much bigger in once life.This festival is very important as it creates a reason to strengthen the mind, to have a contented attitude, and to bring everyone together and to create social health and social commitment, brotherhood. Ganesh Chaturthi is also known as ‘Vinayak Chaturthi’. Speak Ganesha’s mantras by lighting a lamp in worship in the worship of Ganesha, chant this mantra at least 108 timesVakra Tundra i.e. bent trunked ones, Mahakaya i.e. huge bodied, Suryakoti Samprabha means great genius like crore sun. The second line means that Ganesha should complete all my work without any hindrance.A simple method of fasting for  Ganesh Chaturthi Puja . Fasting devotees should wear clean clothes after bathing. In the house temple, Ganesha makes gold, silver, brass, copper or clay and installs statues of the entire Shiva family. Offer vermilion, durva, flowers, rice, fruits, offerings to all the deities. Light a lamp Worship Lord Ganesha while chanting the mantra. Pledge to fast in front of God and do not take food for the whole day. You can make fruit fast. Water, milk, fruit juice, etc. can also be taken. In this worship, idols of Lord Vishnu and Maha Lakshmi can also be kept. Chant the Vishnu mantra, Om Namo Bhagawate Vasudevaya. The festival of Ganesh Chaturthi is more popular in Maharashtra. During this time people make special preparations to make Bappa happy. A variety of dishes and dishes are made. The most special among them is Modak, which is considered sweet of Lord Ganesha. This is the reason why it is specially made as an indulgence from the temple to the houses.Earlier, modak was made only in one or two ways, but now this sweet is being made in many ways. They also taste great.For traditional Modak Jaggery and coconut are used to make this modak. It is specially made in Maharashtra. Ukdiche Modak is specially made by Marathi people. There is also a special way of making it that makes it special. The special thing is that it is very easy to prepare.No work begins without worshiping Lord Ganapathi. Ganesha, revered as the deity to remove obstacles, is the deity to overcome all obstacles and fulfill desires. Shri Ganesh is the God who imparts sincerity, rationality, intelligence, and flawlessness. Just as a small fraction of oil in a drop of water, it cannot dissolve completely in water, similarly, until the Ganapathi devotee assimilates all the features of Ganapathi, he cannot be identical with Ganapathi.