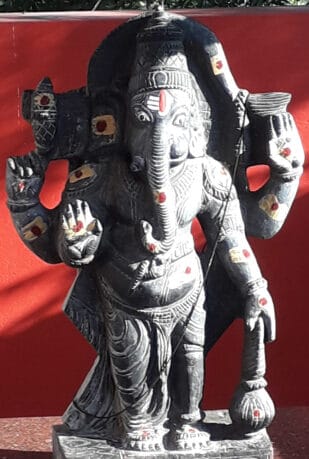 Today we are going to tell you one such miraculous Mantra from Ganesh Ashtottara shatanamavali which immediately fulfills the desire! Ganesha’s name is included in the 5 major devas (Panchadevata) of Hinduism. In the scriptures, 12
famous names of Ganesha are mentioned, whose memorization ends every obstacle and crisis.
Ganapathi is seated in every sphere of life. Our scriptures state that Ganapathi is the pioneer among all the gods. The literal meaning of this name of Ganesha is
terrible or terror. Because in the anatomy of Ganesh, the torso of the elephant is of the male. It is
considered to be a formidable form in worldly terms. But it has a strong message related to religion
and practical life. Therefore, it is believed that he ends bad times, crises, and disruptions in a terrible
or formidable form. In the scriptures, various types of (vidhi) procedures have been described to
please Shri Ganesha.
This mantra should be chanted, after bathing in the morning, sit in a yellow seat, facing the east
direction in the temple or house. Put a yellow cloth on an outpost and install the Shri Ganesh idol or
picture on the dhoti or ashtanga lotus of Akshat. Offer yellow ladoos to Shri Ganesh in flowers,
sandalwood, incense, lamps, and bhog. Light a lamp of cow’s ghee in front of Shri Ganesh. Wishing
Shree Ganesha while promising to remember the mantra 108 times every day, taking resolution for
the special mantra. If you are unable to remember the sandalwood or Rudraksha beads 108 times,
you can chant 9, 18, 27, or 54 times. This special Ganesh mantra is said to be easy and enjoyable.
Gajanan mantra of health
Gajanan, who is famous all over the world and is revered as a priest, is himself the highest in the field
of health. It is a symbol of progress. The transplantation of animal veins into the human body is a
great example of the ongoing efforts to transplant various organs. Ganpati is a symbol of intelligence,
shrewdness, strength, and bravery. Even his devotees consider him more of a friend than God. The
relationship between health and Ganesha is all around. Health care at all levels, spiritual, social,
mental, and physical, comes only in the name of Gajanan. It is said that the disease is eradicated only
when efforts are made at all four levels for eradication. On a social level, unity destroys frustration
and depression by invigorating the mind with brotherhood. On a spiritual level as faith and feelings
subside, the feeling of having someone behind you rises and spiritual strength grows. Swallowing
grief on a mental level and controlling emotions, motivating the mind to be satisfied with the grief left
after losing a loved one. Reciting/listening to the Ganesh ashtotara shatanamavali regularly
improves the health. Ganapathi guides us on how to overcome our physical ailments through our
offerings and objects of worship. E.g. Durva on bile, banana, and modak for perfect appetite, coconut
on rheumatism, Jaswant on blood pressure, etc. Ganeshotsav, which gives the mantra of health
protection on different levels, is perfect in the true sense.
Why do we call him Ekadanta?
Once Parashuram goes to Mount Kailash to visit Lord Shiva. Then Ganapati forbids Parashurama to
come inside. The two of them fight. He faints as soon as he holds Ganapati Parashurama in his trunk
and turns him around. After being alert, Parashuram throws his spear at Ganapati. (It is Shankara who
gives it to Parashurama. So Ganapati holds it on one of his teeth out of respect. But because of this,
he has to lose that tooth. That is why Ganapati is called ‘Ekdant’ or ‘Ekdanshta’. There is a sect in
India that worships Ganapati like other deities. This sect is called ‘Ganapathi’. Followers of this sect
believe that it is God who created the universe. The teachers of this sect wrote various texts. All these
texts are considered standard by the followers of that sect. The major texts of this edition are
Vasadtapaliya or Ganapathi Tapaniya Upanishad, Ganesh Purana, Mugdal Purana, and
Ganeshvaivarta of Brahma Vaivarta Purana. In ‘Ganesha Samhita’ or ‘Ganapatya Nishada’,
Ganapathi and Eclipse are one and it is said that Ganapathi is the primordial cause of the world. There
are similar stories in Ganesh Khand. In one chapter of Brahma Vaivarta Purana, it is said that Radha
used to worship Ganesha. There are similar stories in Ganesh Khand. In the Ganesha continent, it is
described that Shiva underwent ten years of intense penance to please Lord Ganesha.

Ganesh ashtotara shatanamavali or 108 names of Lord Ganesha is the most powerful of all the
gods. Ganesha has been credited with many other titles and epithets, including Ganapati and
Vighneshvara.  With the worship of Shri
Ganesh Ji, the achievement of meaning, knowledge, wisdom, discretion, fame, fame,
accomplishment is easily attained. By chanting the name of Lord Shri Ganesha with the following
mantras, every problem, crisis, disturbance, laziness, disease, unemployment, wealth, etc., are
immediately solved. The mantras presented are considered to be immediately effective. The “Beej”
seed mantra of Ganapathi is ‘Gan’. By chanting the mantra containing ‘Om Gam Ganapataye Namah’,
all wishes are fulfilled.
One should
perform the yaga of Ganpathi to fulfill various desires. While chanting these, there should be jaggery,
cloves, cardamom,  tambul, betel nut in the mouth. This practice is supposed to provide
renewable reserves. It does not have a special bond of purity-impurity. Om Hasti Pishchi Likha
Swaha, to remove laziness, despair, discord, disturbance, chant this mantra of worship of Vighnaraja
form. The mantra is Chanted for improving wealth and gaining power and self-confidence. And for
employment gain and economic growth. Apart from these mantras, reciting Ganapati Atharva
Shirsha, Sankatanashan Ganesh Stotra, Ganeshkavach, progeny Ganapathhi Stotra,
Ganapathi Stotra, Mayuresh Stotra, Ganesh Chalisa helps an individual to live a peaceful life.
Ganapathi is a famous deity in Maharashtra. He is a great God who destroys troubles and gives
happiness. Ganapathi is the deity of knowledge. Therefore, everyone from the youngest to the oldest
worships Ganapathi with great devotion and joy. Ganapathi Aarti is performed from house to house. On
the day of Ganapathi’s immersion, a procession is taken out at ‘Shree’. Saying “Ganapathi Bappa Morya,”
The idols of Lord Ganesha are immersed in the sea, river, or lake. Ganeshotsav is a very joyous
festival.