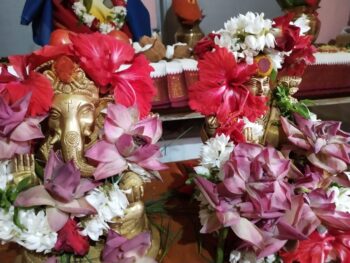 This is the highest form of worship to Lord Shiva

The Ati Rudra Yaga is performed for a continuously 11 Days :

Ati Rudra consits chanting of 14,641 Namaka and 1,331 Chamaka. Along with offering one tenth of the parayana, that is 1,465 parayanas, as Homam completes Ati Rudra Maha Yaga.

Specifically, 121 Pandits (individuals well versed with chanting) along with 15 priests (that are well versed in the homam and other rituals) will be chanting Shri Rudram 11 times a day for 11 consecutive days along with performing Abhishekam and Homam. Because of the huge nature of the japa and homa it is known as Ati Rudra Yaga.By performing Ati Rudra Yaga by ourselves or jointly with others or if we hear the chanting of the mantras or witness the same, it will bestow us with all benefits and wipe out all our sins.

Rudra is also the name of Lord Shiva. The glory of the word Rudra is glorified in religious texts. Rudrashtadhyayi is considered to be a part of Yajurveda.Ati Rudra Yaga – This Homam is performed to pacify the nine planets and thereby remedy the doshas and increase the beneficial effects. And through this one can attain worldly and spiritual pleasures.Lord Shiva is one of the three deities who understands the three professions of creation, protection, and destruction. The aspect of Lord Shiva in the form of Rudra Murthy. Rudra is praised as “the Almighty within the Almighty.” Ati Rudra Yaga is the Yaga dedicated to this powerful Rudra.This Yaga, which is performed in worship of Rudra, is said to relieve fear and anxiety and provide protection. By the grace of Rudra, it is possible to bestow worldly pleasures. Furthermore, it is carried out to tame the nine powerful planets known as the Navagrahas, thereby correcting the defects and increasing the beneficial effects.Ati Rudra Yaga is said to remove mental darkness. Powerful to destroy evil effects. It is able to overcome fear. The sacred energies that emanate from this Yaga are the ones that have the power to transform your life for the better. They provide security and many of the benefits of life. Relieve negative influences and provide peace of mind. So, by participating in this home, remove the weaknesses like fear and anxiety, and protect yourself from tribulations.Ati Rudra Yaga is conducted by experienced priests who are well versed in the Vedic scriptures, according to the rules of Agam, with due diligence. During this Yaga, the ancient Vedic shloka Sri Rudram, recited in the Yajur Veda, is recited. Of these, many forms of Ati Rudra and his attributes are mentioned. The energetic powers of the sound that arise when chanting these mantras can provide many benefits. This Yaga is conducted during auspicious times and at times predicted based on one’s zodiac star. To succeed in all activities and to avoid negative influences and benefits, it is better to conduct this home once a year.

In this Yaga worship, Yaga Basmam and Saffron, also known as Ratchai, will be offered to you. You can keep this in your prayer room and apply it on your forehead daily to get the grace of the Lord.Evil is the most powerful thing in the world at all times. The good things are weak, but the bad ones are somehow eliminated. Our forefathers used many methods to remove the evils that beset us. One of them is the homam ritual. There are many types of this. Here we can learn about  Rudram Yaga and the benefits of doing so.Rudra is one of the many forms taken by Lord Shiva to destroy evil. A good day, start time etc. should be noted by a veterinarian who has good experience in performing Yaga Puja and rituals for performing Rudram Yaga. It is best to do this Rudra Yaga at your home or at Shiva temples. The Ati Rudra Yaga performed in Shiva temples has a lot of energy.

The house should be thoroughly washed and cleaned daily before performing this Ati Rudra Yaga Puja at home. The items prescribed by the priest should be prepared before performing the Homam Puja. Yaga pujas are often performed between 3 am and 6 am, the time of Brahma Muhurta. The Yaga Kundam is set up, in which a fire called Agni is lit and the Rudra mantras of Lord Shiva are consecrated and the Ati Rudra Yaga is performed. At the end of the Yaga, the family should place the ashes of the Yaga and the offerings of turmeric, saffron, vibhuti, and other mangalas on the forehead daily in the house of worship.

The primary benefit of this Ati Rudra Yaga is that it will wash away your past sins and bring you good benefits. It also eliminates unexpected death, fear of death, harassment of enemies, etc. for you or your dependents. Powerful spells are cast when this Yaga is done and the negative forces in your home are eliminated. Eliminate the vibrations of the evil forces that are upon you. Prevents money laundering in the home and prevents harm from thieves. Eliminates problems in your work, career, business.

Rudrashtadhyayi
Rudrashtadhyayi is considered a part of Yajurveda. Although there are ten chapters in this book, which sing the glory of Lord Shiva, Rudra since its eight chapters describe the glory of Lord Shiva and his grace power. Therefore, it is named Rudrashtadhyayi. The remaining two chapters are known as Shanty Adhyay and Swasti Prayadhyay. While reciting Rudrabhishek, the text of these entire 10 chapters is called metaphor or conspiracy text. On the other hand, if the Namak Chamka text method of the fifth and eighth chapters in the conspiracy text i.e. eleven repetition text is called Ekadashi Rudri text. In the fifth chapter, the use of the word “Namah” more often led to the name of this chapter as salt, and in the eighth chapter, the use of the word “Chame” became more popular. Both the fifth and eighth chapters are known as the Panaravruti text called Namak Chamka text. The eleven recurring texts of Ekadashi Rudri is called Small Rudra. At the same time, the eleven frequency text of the small Rudra is called Mahamudra, and the eleven frequency text of Mahamudra is called Adhudra. This verse says these forms of Rudra Puja.It consists of eleven recurring recitations of Rudrashtadhyayi’s Ekadashini Rudri. This is called the miniature Rudra. This is the worship performed from Panchamrit. This puja is considered very important. Worship is performed by a learned Brahmin by effective mantras and scriptural methods. With this worship, one gets rid of the troubles and negative energy in life.

All The desires are fulfilled and enemies vanquished
Person gets all the precious metals
Happiness in this World and happiness in the other World
Spiritual richness and Protection
All material commodities
All imaginable worldly Luxuries
Vast Land,cities,state,kingdom
Mountains,Fields,Hills
Next generations will be having wealth ,health and happiness