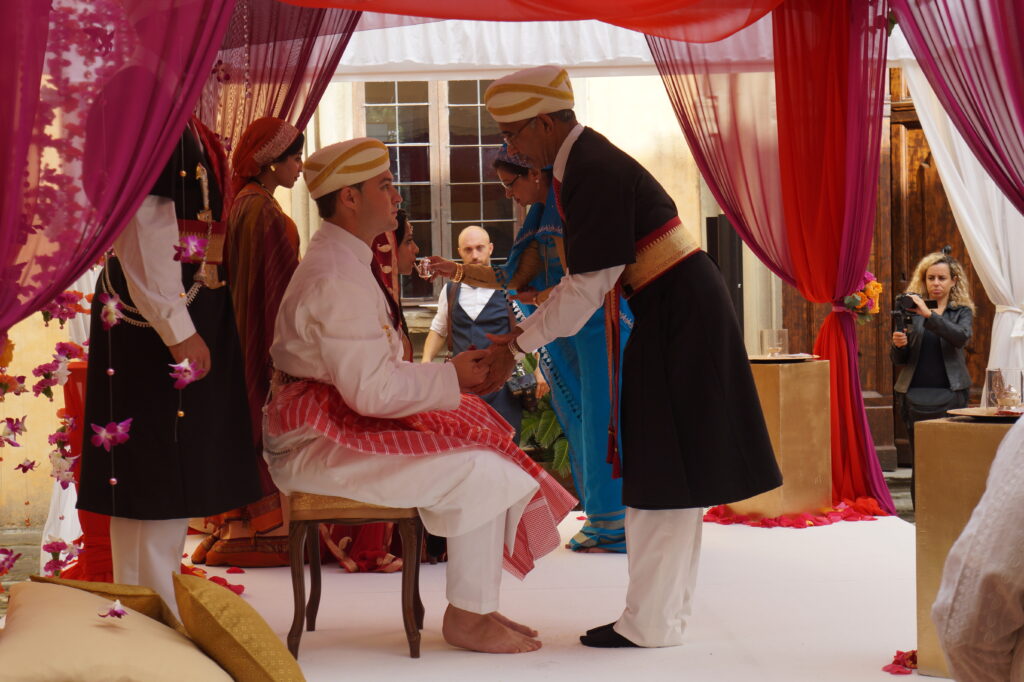 Have you ever dream about marrying the love of your life in the most magical city? Are you one of those girls who plan everything about getting a perfect wedding set up? Under the stars or over the beach side, we can arrange your big day as per your dream fairy tale from your childhood. In a Hindu wedding in Spain, the soon-to-be-wed couple can get married as per the Hindu traditions, and we take all your worries and make all the arrangements as per your needs.Hindu weddings are the most overwhelming yet joyous functions in India. But when you can marry your hero in Indian style but in a foreign land, I bet nothing can compare to that. The delightful weather, delicious food, eye-catching wedding venues, and exquisite sights to visit, all of these combines to make your wedding in Spain a dream come true.We understand the importance of culture, traditions, and marriage. We have shared the experience of arranging weddings as per the traditions with some of our beautiful Hindu couples.Hindu weddings commonly consist of a 3 to 4-day wedding affair with close family members and friends or a long list of close relatives. We have witnessed and arranged the full-fledged seven wedding ceremonies such as:Engagement Tilak Tikka, Haldi ,Mehendi, Sangeet,Tie the knot ceremony ,Reception .Some wedding affairs consist of all the rituals, and some are simple yet beautiful 2 days wedding journeys. Still, all of them are filled with diverse cultures, traditions, and elegant yet vibrant rituals.

The engagement ceremony is an official announcement of the celebration of love. In this ceremony, the couple exchange rings with each other and promise to tie the knot and be with each other’s support system.In this function, the families of the couple meet and shower them with love and blessings. It is also popularly known as the acceptance of the bond of love between the couple. Both the families interact with each other and build a strong relationship of love and understanding. It is said in Indian that marriage is not just a bond between the bride and the groom. It is a bond between the two families. The ceremony commonly includes music, dance, and delicious food.

The first day of the wedding journey commonly consists of the Tilak or Tikka ceremony. This ceremony is not very common and is subjective to the family traditions and culture. The Tikka ceremony is a joyous event that includes both the families where the brother or male family members of the bride celebrate and begin the wedding rituals. The male family members from the bride’s family apply tikka or kumkum over the groom’s forehead and celebrate the joyous function. Music and dance are obviously a part of this ritual as well.

Haldi is probably considered as the most fascinating and joyful tradition in the Hindu wedding. In this ceremony, both the families commonly have their separate function but similar rituals. In this function, the close family and friends are invited only. The people often dress in vibrant colors such as red, yellow, blue, green, and orange. The yellow color has profound importance in this ritual. The bride and groom have applied a turmeric paste for boosting the golden glow before the wedding day and bringing good vibes upon the couple’s future. After the Haldi ceremony, the families sing songs and dance with each other and fill the aura with love and positivism.

The Mehendi function has a prominent and deep meaning for a soon-to-be-wed bride. In this wedding ceremony, the bride and ladies of the family apply mehendi in their hands. The bride sits with the mehendi artist who applies the artistic designs with henna in the bride’s hands very graciously. This ceremony includes a small ritual that the mehendi artist draws the name or initials of the groom’s name in a hidden manner, and the groom has to find his name on the wedding day. The ritual is considered as redundant yet beautiful as it builds the connection between the couple.

The sangeet function is one of the most fun, joyful and heart-warming traditions in the Hindu wedding. This function is commonly arranged with the mehendi ceremony. In this function, both the families prepare beautiful and heart touching performances for the couple. The families sing songs and dance together. The couple also dances and enjoys the function with both the families. The couple takes blessings of the elders of the families and eats delicious food together. As it is a famous saying in India that the family which eats together stays together.

This wedding function is the most auspicious event in the lives of the bride and the groom. This function consists of various rituals and traditions which mark the official bond of a husband and wife.

In a Hindu wedding, the bride’s attire is considered the most beautiful attire in India. The bride commonly wears the red dress and pairs it with jeweler’s such as maang tikka, nose pin, earrings, bangles, and necklaces. The Hindu bride covers their head with a chunri as per the culture. In contrast, the groom gets commonly dressed in a traditional sherwani dress or kurta pajama. The groom pairs the dress with a couple of Indian shoes often referred to as Mojri or Jutti. Turban is for covering the groom’s head and is not necessarily worn by all the Hindu grooms. It depends on the traditions of the families.

The first ritual of a Hindu wedding is that the ceremonies began with taking the blessings of Lord Ganesha. Following the Ganesh puja, the Pandit Ji starts chanting the mantra. The couple sits around the holy fire, commonly known as Agni. Holy fire or Agni is taken as the witness to the sacred marriage of the couple. The couple exchange garlands with each other. The bride and the groom then take seven Pheras in a circle around the holy fire and make seven Vachans or vows to each other. The groom then places a necklace commonly referred to as Mangal Sutra around the neck of the bride. He then applies red powder, known as Sindoor, in the head of the bride as a token of their marriage and love.The other wedding rituals as Jutta chuppai where the sisters of bride steal shoes of the groom and hide them Later when the groom tries to find the boots the sisters of the bride bring the shoes to the groom but after taking the Naeg commonly referred as a gift from the groom as a token of the love for the bride’s sister.At last, the bride’s wed off is a tearful yet heart-warming ritual where the Hindu bride bid the farewell to her family members. Both the bride and the groom take blessings from the elders and bid them adieu.