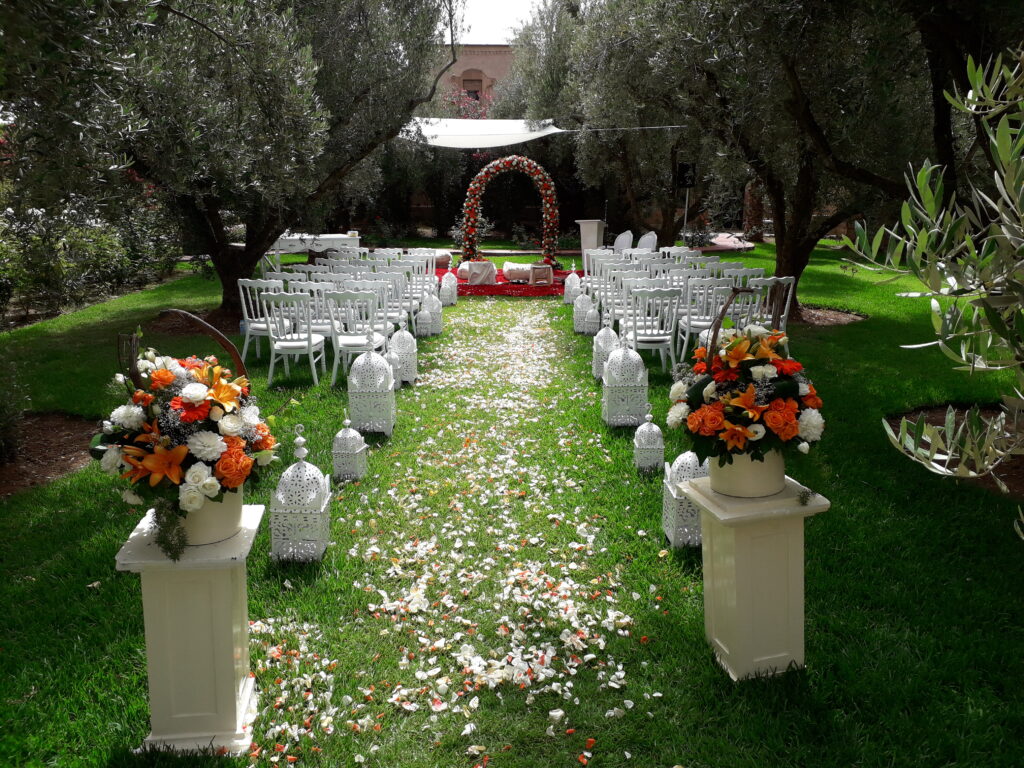 An Indian wedding in Morocco

One fine evening, Akash and Shreya, were trying to figure out what is going to be that place, where they will tie the knot. Akash wanted to get married in Amsterdam for its beauty, whereas Shreya wished to tie the knot in Paris as per her childhood dream. After ‘n’ places, Shreya suddenly says, “Morocco?” To which Akash replied, “Yes, Hindu Wedding in Morocco. “The couple loved the idea of marrying each other in the North African country known for its rich heritage in art, monuments, culture, architecture, and its diversified traditions. The country is filled with exotic places to explore, such as The Moroccan Atlas Mountains, Moroccan desert and Sahara, wild beaches and azure coasts, Moroccan monuments, rich history, culture, and much more. Akash and Shreya were enthusiastic about reminiscing the spark of their relationship with romance and starting their new phase of life at the most adventurous yet colorful place.

As per a traditional Moroccan wedding, the couple also planned a five-day wedding, including all the colorful Indian ceremonies and redundant but beautiful traditions. The days of the wedding were designed as per the rituals & culture for the couple to reminiscence the romance & the families to enjoy & build the bond with each other. As we say in India that marriage is not just the bond between the bride and groom, it is a bonding between both sides of the families. This Indian wedding with a mix of Moroccan traditions was a breath-taking experience spread over five days.

A day in Atlas mountain ski

The bride and groom started the five days wedding journey with the beauty of The Atlas Mountain. The couple was extremely excited about commencing their journey and relive their love story all over again.  The couple went skiing in the beauty of the Atlas Mountains for a couple of hours. The view was just breath taking.  Akash wished for capturing a few moments of love featuring the beauty of the serene view of Atlas Mountain.The bride and groom stayed at the Palais Rhoul |Best Luxury Hotel in Marrakesh Morocco for its traditional beauty, which entirely suited their Indian wedding affair. Later on, in the evening, the couple received their guests for dinner at the hotel and took their blessings. Both the families were delighted and excited for witnessing the celebration of the couple’s love.

The next following day, Akash and Shreya started their day with a Hindu tradition Puja. The couple took the blessings of gods at the most famous Hindu temple in Morocco at Sidi Mouamri, Meknès-Tafilalet with all the relatives and family members. The temple is situated at a hilltop area, is surrounded by trees, and shows the most serene view of the whole city. Later both the families explore historical monuments and artifacts such as Bahia Palace – Opening Hours, Prices and Location in Marrakesh, which was built in the 19th century, the main square and highlight of Jemaa el-Fnaa – The Main Square and Market Place of Marrakesh, and the most popular market of the town the souks market. Both the families enjoyed the sight-seeing and built a greater bond with each other.

At last, the bride and groom with their entire families ended the day, followed by dinner at palais-soleiman – Restaurant deluxe.

The next day couple were dressed and ready for their sangeet function. The sangeet function is probably the most fun segment of an Indian wedding or Hindu Wedding in Morocco. Both the families come together to share happiness and celebrate the auspicious bond of their children. At sangeet, their decorations were impeccable. The hall was decorated with marigold flowers and red roses. The stage was set in a Bollywood theme with shimmery decorative banners. Akashi’s sisters commenced the sangeet ceremony with an outstanding dance performance. Followed by it, Shreya’s mother showcased a sweet, emotional performance of a bond between a mother and daughter. Later on, the couple also performed a romantic dance for both the families. The couple also wished for capturing the joyous moments of the sangeet function. Sangeet is a term that translates to “sung together,” and Akash and Shreya’s sangeet function ideally suited the term. The entire place was filled with love and celebration. Later on, everybody danced and sang songs until then in the evening.

The following morning the couple started with their wedding rituals. The most joyous and colourful ceremony in a Hindu wedding is the Haldi. Shreya was dressed in a yellow lehenga chunni, whereas Akash was wearing an orange kurta and dhoti. Both the couple were looking great in their traditional attires.  In the Haldi ceremony, both Shreya and Akash were applied a paste of turmeric over their body for good luck. This ceremony is practiced in different ways and is known by various names such as ubtan, tel rasam. The ritual has deep meaning for being practiced as it is done to beautify & prepare the couple for their big day. Also, the color yellow is applied to keep evil and sorrows away from the couple. Music and dance were also a part of the ceremony where the family members of both sides danced and enjoyed the ceremony.Later in the evening, the Mehendi ceremony was scheduled. In the Mehendi ceremony, henna was applied over Shreya’s hands and feet and on the groom’s hands in a beautiful artistic design. Shreya was dressed in a kanjivaram saree whereas, Akash was wearing a traditional kurta pajama. The ceremony was later followed by classical music and dance performances of Moroccan artists. Both the families enjoyed conventional Moroccan art as well as delicious Moroccan food.

Finally, the big day came, it was 12 July 2019, and it was a lovely sunny day. Both the couples were excited about getting married but nervous at the same time. The to-be-wed pair were not allowed to meet or talk to each other until the tie the knot ceremony. There is a famous ritual in the Indian culture that the bride and groom cannot see until the wedding for keeping the evil away from their happiness.The couples get dressed for the wedding.  Shreya was covered in beautiful traditional red saree, followed by heavy gold jewelry. A red chunri followed her head as “ghunghat,” an Indian tradition for covering the bride’s face before the wedding. Whereas Akash was wearing a cream-colored traditional sherwani dress and embroidered shoe known as “mojri.” Akash was also wearing a Saffa over his head popularly known as a turban.In an Indian wedding, a groom’s arrival is referred to as a celebration. Akash was ready and arrived at the “mandap” mandap is a place prepared for the holy ceremony of marriage. Where there is holy fire light up around which the bride and groom take 7 circles as the symbol of making seven promises to each other for life. After a while, Shreya walked down the aisle with her bride’s maids towards the mandap. The mandap was set up and decorated with flowers and lights, which symbolize the happiness and growth of the couple’s future life. Both Akash and Shreya sat underneath the mandap and around the holy fire or Agni being the witness of the auspicious and holy ceremony. The Hindu priest in Morocco started the ceremony followed by the Ganesh Puja for good luck and happy married life filled with peace. After a while, the couple ties the knot in a literal sense as they exchange the “Jai Mala” garlands. And then the groom places a necklace made up of black and gold moti called “Mangal Sutra” around the neck of the bride as a symbol of the love of the groom. Following the Mangalsutra, the groom puts “Sindoor” in the hair of the bride. In the last segment of the ceremony, Akash and Shreya made seven vows to each other for each other’s support and strength in love, sickness, and sorrow.At last, a playful ritual of hiding the shoes of the groom popularly known as “Jutti chupai” was performed. Where the sisters of Shreya steal Akash’s shoes just before the ceremony begins and hide them in the corner, and to get the shoes back, Akash had to give a shagun (a token of love for the bride’s maid) to the sister of the bride.

After completing the necessary ceremonies later in the evening, the reception was scheduled at Villatajn Marrakesh for taking the blessings of all the guests and relatives. This function was arranged for introducing Shreya to all the guests and family members of the groom’s side.  The gathering followed with the dance, music in Moroccan and Punjabi style, a rare mixture of traditions. At the end of rituals and traditions, both the families had dinner together and enjoyed the auspicious night of celebration. Later on, the bride’s send-off was a tearful event popularly called Vidaai in an Indian marriage. As the bride is leaving her house and parents and starting a new phase in life, the goodbyes were rather heart-warming and tearful for Shreya and her parents. Last, the couple got married and began to share the beautiful and colorful experience called marriage with each other.