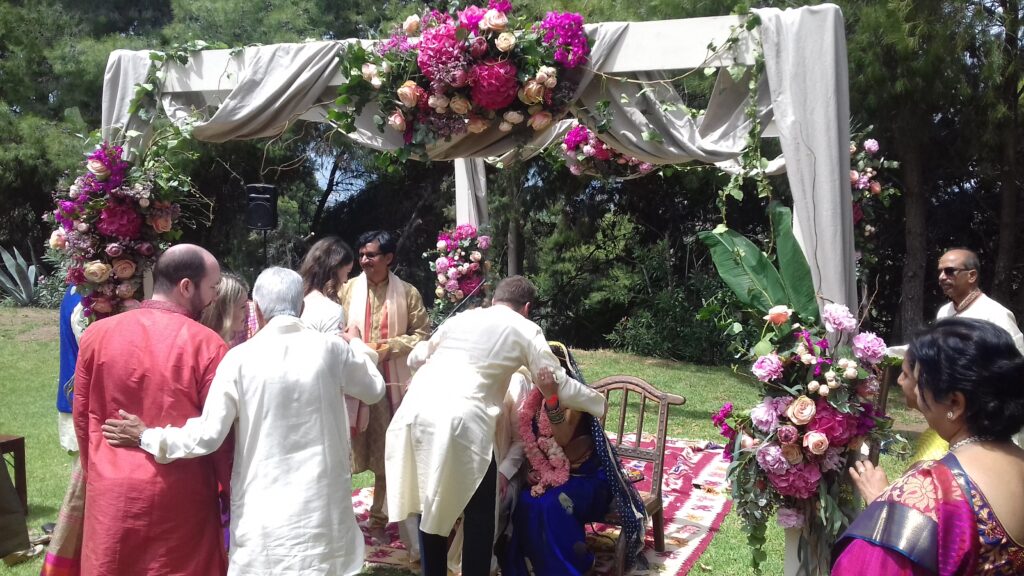 This is the wedding story of Nakul and Sukriti. This couple had the craziest and romantic ideas planned for their wedding. As both of them are Hindu, they wanted a big fat Indian wedding laced in the Greek style.

Greece is known for its ancient history, artifacts, and romance. It’s one of the most visited countries by people from different corners of the world to celebrate their love. Nakul and Sukriti were childhood sweethearts since they were 16. The wedding journey was all planned, and arrangements were made; it was a four-day wedding affair which included some of the beautiful and ancient places in Greece.

Nakul and Sukriti’s wedding journey started before three days of their wedding day when they arrived in Greece and stayed at Alissachni hotel in Mykonos, Greece. Nakul and sukriti wanted to explore the ancient and exotic places in the city. So they visited the Windmills of Mykonos; Nakul was extremely excited for capturing a few moments for a pre-wedding photoshoot featuring the breathtaking view of the church of Panagia paraportiani. Later they visited the Armenistis Lighthouse and Ano Mera Village. Later in the evening, they welcomed the guests and their families at the hotel. They enjoyed an exquisite dinner together at Baos fine dining.

Day 2  Engagement – the promise of love

In an Indian wedding, there are several holy rituals that must be followed. They are full of colorful rituals, and overwhelming, yet joyous traditions. The first phase of a Hindu marriage is known as Sagai, popularly referred to as engagement. Nakul and Sukriti desired for an exotic beach set up for their auspicious occasion. The joyous and fascinating engagement took place at Kalua Mykonos. The set up was arranged with a serene view at the seaside. The surroundings were decorated with tropical flowers, driftwood, seashells to create a classic aura.

In an Indian sagai, the bride and groom exchange rings with each other. The rings are considered as a token of the promise for their love and celebration of their bond. Nakul and Sukriti were dressed in their traditional attires. Sukriti was wearing a pink saree with diamond jewelry, and light makeup. In contrast, Nakul was wearing a cream kurta-pajama and off white mojri. Nakul and Sukriti exchanged their rings and took the blessings of their families and other elder relatives. The families showered the couple with love and gifts and exchanged gifts with each other. This ritual is considered as shagun popularly known as for good luck and is a beautiful tradition in Hindu weddings.  The day ended with music, dance, and the families enjoyed the function and filled the place with love and happiness. Later both the families enjoyed the delicious Indian food with greek music and gave blessings to the couple.

The next following day commenced with joyous yet beautiful Indian traditions that are Haldi. Haldi is a ritual which is mostly followed in an Indian wedding. Sukriti was dressed in Indian attire, a yellow salwar kameez, and beautiful flower jewelry for enhancing the Indian look. Nakul, in contrast, was wearing Dhoti and kurta paired with Jutti (Indian shoes).

In the Haldi ceremony, the bride and groom’s families apply a paste of turmeric to the different parts of the to-be-wed couple for enhancing their beauty. This ritual is of great importance as Haldi’s yellow color is applied to ward off evil from the happy couple. The ceremony then followed with Indian style music and dance. The couple danced and captured a few moments with their families and made it a memorable day.

Later in the evening, the function of Mehendi, popularly known as henna, was arranged. Mehendi function is probably one of the most fun traditions in Indian culture. In this ceremony, the bride sits for hours with a Mehendi artist to apply different artistic designs with henna on her hands. This ceremony also has a beautiful ritual where the Mehendi artist draws the name or the initials of the groom’s name. The groom is supposed to find the hidden name from the design of Mehendi in the hands of the bride on the night of the wedding.

The ceremony then followed with the sangeet where the sisters of sukriti prepared a dance performance for the function. The mothers of the couple graced the auspicious function with their singing. The couple also danced and sang songs with the family members and took their blessings for a happy future.

The day started with a beautiful morning for the couple. Nakul sent a boutique of Sukriti’s favorite flowers. The couple was not supposed to see each other until the wedding as it is a part of Indian rituals.

The couple started being dressed for the ceremony. Sukriti wore an elegant red saree paired with heavy gold jewelry and a red chunri over her head. An Indian bride’s attire is considered as the most beautiful dress in the world. Nakul was dressed in a traditional cream-colored sherwani paired with Jutti. The groom also wore a turban over his head as part of the Indian attire for completing the look.

The wedding set up was arranged in an open garden where the bride walked the aisle and arrived at the mandap. A mandap is a place arranged for the holy rituals and traditions of the wedding. It was decorated with red roses, lights, flower leaves, and ribbons.

The ceremony started with Lord Ganesh puja for good luck. The couple exchanged garlands with each other. The Sahadev Pandit,  said the mantra and the couple sat around the holy fire, Agni, which is considered to witness the sacred ritual of marriage.

Followed by mantra Nakul and sukriti took seven circles around the holy fire and made seven promises to each other as wedding vows. Nakul tied the knot & placed a necklace popularly known as a Mangalsutra around the neck of sukriti and put Sindoor in the head of the bride as a symbol of their love. At last after the main ceremony other rituals of marriage as Jutti chuppai where the sister of bride hide the Jutti of the groom and after the marriage ceremony the groom has to find his shoes or give shagun or Naeg (some gift) to the bride’s sister as a token of love for her. Later the bride’s wed off ceremony was extremely heartwarming and tearful. The bride said her goodbyes to her family and took the elders’ blessing for starting her marriage life.

An Indian wedding is an experience full of vibrant colors, beautiful rituals, and joyous moments that make the auspicious occasion more memorable.