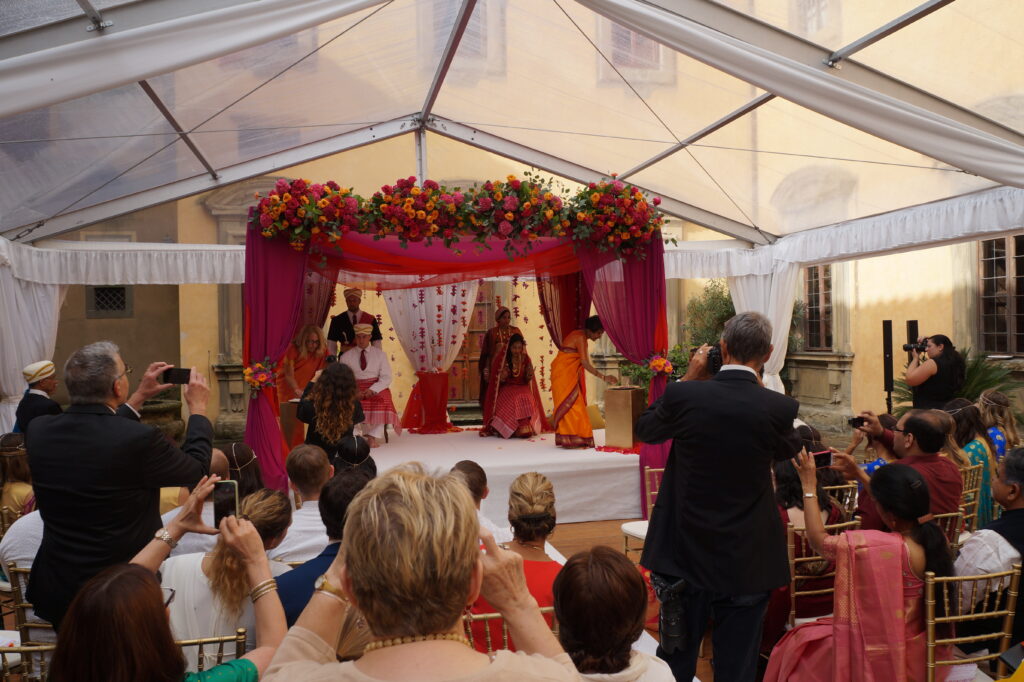 Hindu traditions and rituals are the most colorful, joyous, and heart touching occasions in the world. The depth of emotions and beliefs they possess makes them beautiful and alluring. There are various ceremonies, rituals, and traditions performed on different occasions in a Hindu person’s life. Such ceremonies are considered essential and must be performed as per the Hindu shastra and Vedas. Some traditions are simple and can be achieved by an individual such as puja or prayer on regular days. Still, other ceremonies are not easy to perform without the assistance of a Hindu pundit. Finding a Hindu pandit (priest) in India is facile or a piece of cake, but finding and booking a Hindu Pandit in France foreign land is insurmountable.

According to the recently analysed data on France’s population as per the religion, about 40,000 Hindus are living in France in the year 2020.

We are here to assist those 40000 thousand Hindu residing in different cities such as Paris, Strasbourg, Lyon, and more in France. Hindu pandit (priests) are available for different occasions in any city of France.

Hindu weddings are considered one of the most auspicious and joyous functions in the life of a Hindu person. A Hindu marriage consists of various traditions and rituals for which a pundit’s presence and assistance is significant. A Hindu pandit can assist in the proper performance of the rituals and traditions as per the Hindu shastra. The rituals for which an individual might need the assistance of a pundit (priest)are as follows:

Ganesh puja – The first ritual in a Hindu wedding is Ganesh puja. This ritual involves remembering lord Ganesh for taking his blessings. It is considered one of the most sacred pujas in India, it is the first step before any positive step. This puja is performed before starting any project at work, opening a new office, the inauguration of a house, or initiating a new phase in life. Ganesh puja has a deep meaning in the Shastra. It is considered to bring good luck and prosperity in life. A Hindu pundit’s assistance is significant for such pujas. The pundit (priest) recites a mantra and assists the people in the puja’s performance in the correct manner.

The wedding ceremonies – A Hindu pundit’s presence is vital for the essential performance of wedding ceremonies. The pundit Ji recites the mantra, shares the virtue with the bride and groom and explains the meanings of Sanskrit mantra during the Pheras. Phera is the ritual when the bride and groom take seven circles around the holy fire and make seven vows. Pandit Ji guides the bride and the groom through the rituals of marriage, such as exchanging the garlands, tying the knot of necklace which is popularly known as Mangal Sutra, and putting the red powder that is often referred to as Sindoor over the bride’s head and more.

The thread ceremony –In this ceremony, a Hindu pandit (priest)is considered as a Guru for providing virtues to the young males of the age of 6 to 12 years. This period of the age is a crucial period for males. It is popularly referred to as a transition period for such males. In this ceremony, the priest provides the boy with a sacred thread to be worn over the left shoulder. The parents instruct the boy to pronounce the Gayatri mantra. The Hindu boys who are entitled to the sacred thread are commonly known as twice born. After the ceremony, the boy takes virtues and blessings from the priest and the elders of his family.

In some cases, Hindu religious ceremonies, pregnancy or birth is performed during pregnancies for ensuring the good health of the infant in the mother’s womb and the mother as well. Some people also arrange small puja in their house or temples, praying to the god and goddess for bringing good luck upon the mother and child.

Also, some charms and pujas are performed during the child’s birth to ward off the evil and keep the child safe and healthy.

At the funeral in the presence of the male mourners and a Hindu pandit, the final rite and cremation rituals are performed. Ashes and bones of the deceased person are collected and immersed in the holy river Ganga followed by a peace enabling puja.

Hindu festivals –several Hindu festivals are celebrated by Hindus every year in the entire world. The celebrations for which a Hindu pundit’s presence is necessary are Diwali puja, Guru Poornima, Holi, Navratri puja, Ganesh Chaturthi puja, Janmashtami puja, and more. All these festivals are of significant meaning as per the Hindu Vedas. The rituals and traditions relating to these festivals must be performed in a specific manner provided in the shastra. The rituals like gifting some money, clothes, or food to a needy person or animals are popular in the performance of these rituals. The ways in which the arti has to be done are also prescribed in detail, which must be rigorously followed. The performances of these rituals and traditions in the right manner earn good luck, prosperity, and peace in the Hindu person’s lives.

In France or any other place that requires availability of hindu pandit or priest, a simple call to any Indian based family would work. Most Indians are in touch with other Indians and smaller communities are formed who meet and celebrate various festivals. But not all Pandits perform these rituals.

Some of them dedicate their lives to the temples. They take care of the temple and clean, bathe the god’s statue and recite mantras every day. In some cases, these pandits also leave the pleasures of life and do not marry and have kids. They just dedicate entire lives to god.